'Shame on Us': Jim Jordan Blasts Congress, Trump As He Helps Introduce Amendment to Build the Wall 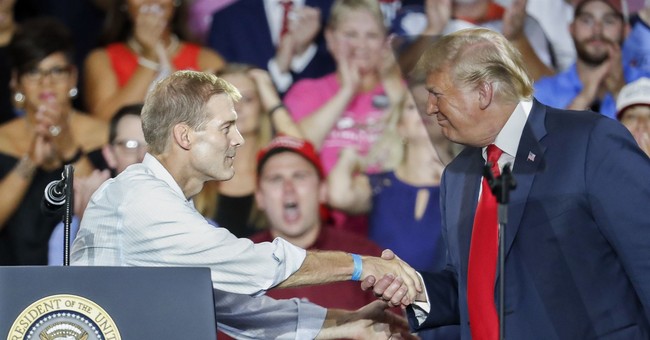 "Fool me once, shame on you. Fool me twice, shame on me," Rep. Jim Jordan (R-OH) said on the House floor Wednesday night. However, he had a new phrase to coin, "Fool the American people four times, shame on Congress."

Jordan and his fellow conservative members of the House Freedom Caucus made their final plea to President Trump to not abandon his promise to build a wall at the U.S.-Mexico border. Then-candidate Trump made the promise to Americans back in the 2016 presidential election, but three years and four broken promises later, they are no closer to construction.

Things seemed hopeful back in March, when the leadership suggested money for the border wall would be included in the omnibus spending bill, but it got pushed to September. Not to be. It then got kicked back to Dec. 7, only to again be delayed to Dec. 21. President Trump inspired conservatives by putting his foot down about the $5 billion he wanted for the wall in a meeting with Democrats Chuck Schumer and Nancy Pelosi last week, but a few days later the White House backtracked on those demands. Now, an exasperated Jordan said, "they're talking about kicking it to Feb. 8."

Watch the video below (Jordan's remarks start at the 21:00 mark).

You've got to be kidding me," the congressman said. "We're supposed to believe we're going to keep our promise" under the leadership of Nancy Pelosi?

It's pretty "simple," he urged. Do what they promised the American people.

The Freedom Caucus demands Congress vote on a spending bill with border wall funding. Jordan helped introduce an amendment that includes $5 billion for the wall and reforms to our asylum laws, such as the end to catch-and-release. Plain and simple, Jordan said, their amendment will "fix the problem."

"This border is a constitutional responsibility of the federal government," declared Rep. Andy Biggs (R-AZ) following his colleague's remarks.

“The president many months ago said he wouldn’t sign another funding bill unless we gave him wall funding. So what did this House do? It passed a bill to fund the Department of Defense and passed a short-term CR and said, ‘You know what? We’re going to have that fight, but we’re going to have that fight after the midterms.’ You know what, Mr. Speaker? It’s after the midterms. And we’re here to say that we’re ready to fight on behalf of all the freedom-loving Americans to make sure we have secure borders. Mr. President, we’re going to back you up. If you veto this bill we’ll be there. But more importantly the American people will be there. They’ll be there to support you. Let’s build the wall and make sure that we do our job in Congress.”

Border security is clearly a hot button issue for Americans. An Air Force veteran who just started a GoFundMe page seeking funds for the wall was shocked to find it is already over $1.5 million, as of this writing.