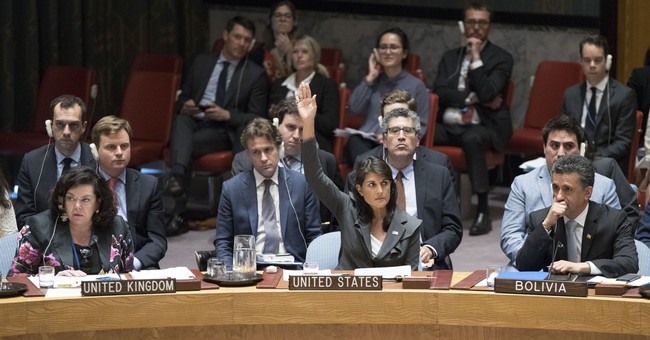 For the umpteenth time, the United Nations General Assembly has voted to condemn Israel for defending itself. By a tally of 120 to 8, the members declared that Israel was guilty of “excessive use of force” against Palestinians who were protesting the opening of the U.S. embassy in Jerusalem. The resolution also requested recommendations to protect Palestinians. For 10 weeks now, the two sides have clashed at the border, resulting in 120 Palestinian deaths.

Israeli Defense Forces warned protesters not to approach the Israeli-Gaza border on May 14, the day of the embassy opening. They did anyway - some armed - so the IDF troops responded with force. Still, the UN resolution suggests Israel's actions were not justified.

Where the resolution succeeded in condemning Israel, it failed to target Hamas, who, reports have shown, orchestrated parts of the violent protests.

U.S. Ambassador to the UN Nikki Haley excoriated the General Assembly for their "morally bankrupt judgment."

Haley's sentiments were shared by Sen. Marco Rubio (R-FL), who wondered why we were still funneling money to the international body.

Why are we still giving so much money to the ?@UN? ? The General Assembly vote was not just anti #Israel bias,it is anti-semitism disguised as international diplomacy. Totally grotesque that no mention of the evil acts committed by #Hamas
https://t.co/vFhA1wpag8

There are no legal ramifications for the UN resolution, but the pro-Palestinian side would consider it a "moral victory," the New York Times explains.

Joining the U.S. and Israel in their dissent against the resolution were Australia, the Marshall Islands, Micronesia, Nauru, Solomon Islands and Togo. Forty-five others abstained.