Deadly Protests in Gaza Ahead of Jerusalem Embassy Opening 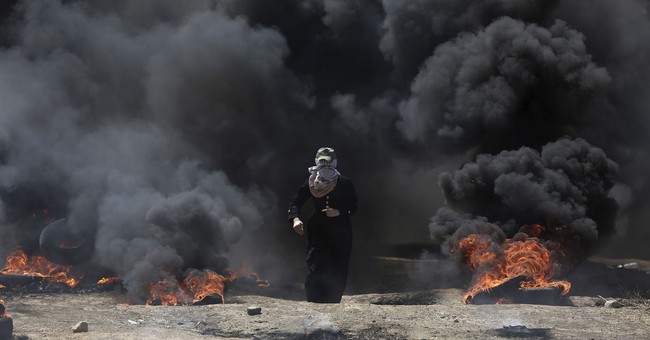 Updated numbers from the Palestinian Ministry of Health show 52 people have been killed today in #Gaza, including 5 children under 18.

UPDATE: The number of deaths near the Gaza-Israel border has risen to 37. Over 1,500 are injured.

BREAKING: Gaza health officials say the number of Palestinians killed by Israeli army fire on the Gaza border has risen to 37.

Monday is opening day for the new U.S. embassy in Jerusalem. The ceremony, as advertised by President Trump himself, will begin within the hour.

U.S. Embassy opening in Jerusalem will be covered live on @FoxNews & @FoxBusiness. Lead up to 9:00 A.M. (eastern) event has already begun. A great day for Israel!

Israeli Prime Minister Benjamin Netanyahu declared it an "amazing day" and thousands of Israelis are cheering the move.

Unfortunately, as expected, protests have erupted in the Gaza Strip, where over 35,000 rioters have amassed. Israeli troops have killed over two dozen Palestinians who got too close to the border fence. It marks the deadliest day in Gaza in four years.

President Trump announced the U.S. embassy in Israel would move from Tel Aviv to Jerusalem back in December. It cost the U.S. a relationship with Palestinian President Mahmoud Abbas, but cemented our friendship with Netanyahu.

Congress passed the Jerusalem Embassy Act back in 1995. Yet, no president was able to enforce the relocation until No. 45. His supporters note that it's a campaign promise kept.

"We are opening it many years ahead of schedule," Trump said in a prerecorded video address that aired during the opening ceremony. "Our greatest hope is for peace."

In his own remarks, Netanyahu thanked Trump for following through on his pledge.

.@netanyahu: “Thank you President Trump for having the courage to keep your promises.” pic.twitter.com/en76TdDYiw