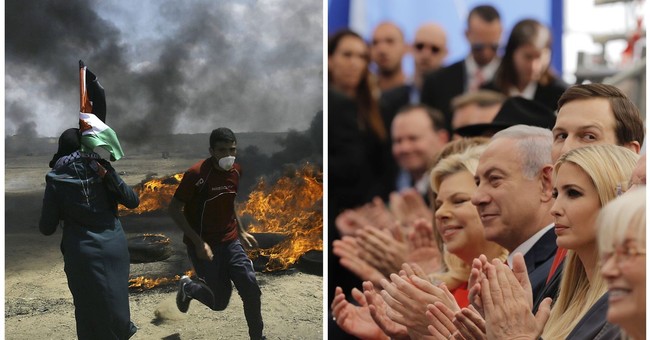 When Israel protects itself against hostile aggressors on its borders, members of the "international community" and much of the media rush to condemn "both sides," reserving special scorn for the Israeli government's "disproportionality" and lack of "restraint."  In truth, the actual disproportionality lies in the amoral double standard of relentlessly singling out the world's lone Jewish state for defending its citizens and sovereignty against the Islamist terrorist threat on its doorstep.  In the latest bout of this moral blindness, Israel's critics are currently wringing their hands about the senseless violence and death visited upon "peaceful protesters" along the Gaza border by the IDF.  The way some news outlets tell it, these poor, downtrodden Palestinians were merely venting their frustrations over Donald Trump's embassy 'provocation' -- then Benjamin Netanyahu ordered a massacre against them.  Astoundingly, that framing is only a slight exaggeration.

In reality, these were riots deliberately orchestrated and fomented by Hamas, the terrorist organization that took over Gaza after Israel unilaterally withdrew from that territory in 2005 (a titanic failure of the sort of land-for-peace goodwill gesture endlessly urged by Israel's detractors, in spite of other historical inconveniences).  Here are some telling vignettes from those attempted incursions into Israeli territory, the stated purpose of which was to penetrate the border, infiltrate the country, and murder Jews. Hamas intentionally put their own people in harm's way by lying to them (via the Washington Post):

Hamas is nudging their (violent) demonstrators towards military positions by telling them the Israelis are abandoning their posts. pic.twitter.com/YZoJ1HjEIl

Absurdist agitprop for media consumption, at which Hamas -- which uses schools, hospitals and mosques as shields -- is well-practiced:

On @NPR, @NPRinskeep just asked a Gazan with a kite w a swastika on it what it means to him. "The Jews go crazy when you mention Hitler." Steve Inskeep asked if he knows the Israelis are using the swastikas to discredit Gazans. "It's what we mean. We want them to burn," he said.

Credulous western media outlets lament Israel's lethal 'overreaction,' using split-screen images (like the one attached to this post) juxtaposing the US embassy opening with the bloody upheaval in Gaza to discredit America and Israel.  Meanwhile, Hamas leaders are telling Arabic-language press some candid, evil truths.  If only the journalists purporting to be horrified by civilian deaths would listen:

Senior Hamas Official Mahmoud Al-Zahhar on Gaza Protests: This Is Not Peaceful Resistance, It Is Supported by Our Weapons pic.twitter.com/aut0Q7SPD9

Those who are wounded or die earn larger Hamas paychecks for their families.  Furthermore, the killing is hardly "indiscriminate."  As you read the following boasts from the lips of Hamas officials, remember that Israel issued loud warning against rushing the militarized border, dropped leaflets in Arabic explaining the consequences, and fired warning shots prior to using deadly force.  That may help explain why the deceased are overwhelmingly Hamas terrorist operatives whose goal was to murder Israelis.  These Hamas-supplied numbers (which are statements against interest, from a propaganda perspective) speak for themselves:

Senior Hamas official sets the record straight on who was killed in last Hamas-orchestrated riots: "50 of the 62 martyrs were Hamas". Take his word for it. This was no peaceful protest. pic.twitter.com/oop2y3oWrB

Here it is – the smoking gun: Hamas leader Salah al-Bardawil boasts to the group's Al-Aqsa Radio that 50 of the individuals killed in Monday's violent riots at the Gaza-Israel border belonged to Hamas. Here's the original in Arabic: https://t.co/BItsEXUDst pic.twitter.com/Qu6sJIeyED

In a sane world, this would resolve the dispute -- and decisively so -- in Israel's favor.  A few more points: The specious "disproportionality" argument often rests on the disparity in the death toll, and often elides gruesome lessons learned by the Israeli public.  That Israel is quite effective at defeating Hamas' murder attempts should not be held against Israel.  Their anti-rocket technology and professional military protects civilians from the massacres Hamas would love to carry out.  That's the whole point of self-defense.  It's is therefore preposterous to use the imbalanced body count as an indictment of Israel, particularly considering Hamas' undisguised genocidal intentions (whereas Israel bends over backward to avoid innocent loss of life).  Also, the "restraint" refrain is something of an empty tautology:

If Israel had been more “restrained” against Hamas-orchestrated invasion efforts — and terrorists had infiltrated the country to kill Jews, as intended — Israel’s inevitable response to those murders would also have elicited more demands for “restraint.”

It should also be said that this whole mentality treats Palestinians as agency-free vessels of rage who cannot help themselves but to commit or threaten horrific acts.  How is this not outright bigotry disguised as sympathy?  Finally, one of the more nuanced critiques of the Trump administration and Israeli government this week involves the timing of the embassy relocation, which coincided with the 70th anniversary of Israel's founding.  Pairing these two milestones needlessly heightened tensions, according to this objection.  There's certainly some validity to that, but my response is threefold: (1) It's highly likely that pushing the embassy opening to another date would merely have furnished Hamas with yet another opportunity for violent agitation, (2) the reason Israel's national birthday is a volatile time is because Hamas does not recognize the Jewish state's right to exist and routinely calls for its annihilation (this is the most relevant dynamic in this entire debate), and (3) this simple but revealing observation:

No violence in the West Bank. No violence in Jordan. No protests in the Arab Street. Only Hamas. Only a terrorist group that urged its militants to attack Israel. Terrorists who refuse to recognize Israel’s right to exist. And this is how the NYT covers it. Shame. pic.twitter.com/5UFHiPP8va

The broader "Arab street" was not set aflame by the US embassy move, underscoring the point that this was a discrete operation ginned up by Hamas, targeting one subset of Palestinians.  It's almost as if the United States and Israel are not the villains here, and that the blame does "squarely" lie elsewhere.