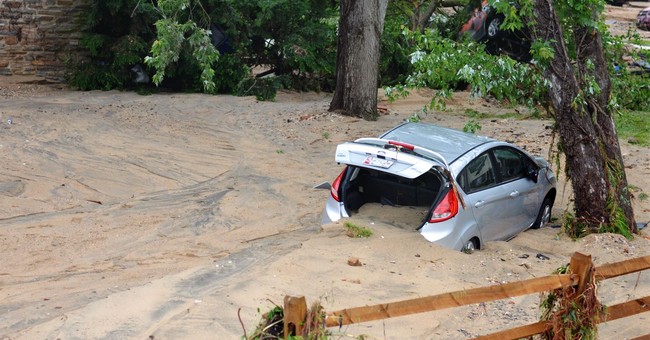 The community of Ellicott City, Maryland experienced devastating floods this weekend. It was their second in two years. Witness Kate Bowman described to the Baltimore Sun how one man had tried to rescue her and her cat before being swept away by the rushing water himself on Sunday.

“I could barely see anything and I could barely hear anything,” Bowman, 41, recalled. “He stepped over the ledge to try to get to me, and he was washed away.”

BODY FOUND: Howard County Police have been notified that the body of an adult male has been found by searchers in the Patapsco River, just across the Baltimore County line. Police are awaiting identification and will update as information is confirmed. #ECFlood
###

Hermond had joined the Maryland Army National Guard in 2009 after serving in the Air Force for more than a decade.

Before this weekend's natural disaster, Ellicott City citizens were still trying to recover from the 2016 flood, which caused millions of dollars in damage. The city had been working on a flood mitigation plan, but only 30 percent had been completed by the time this weekend's flood hit. The 2016 flood was, after all, supposed to be a "1-in-1,000" kind of storm.