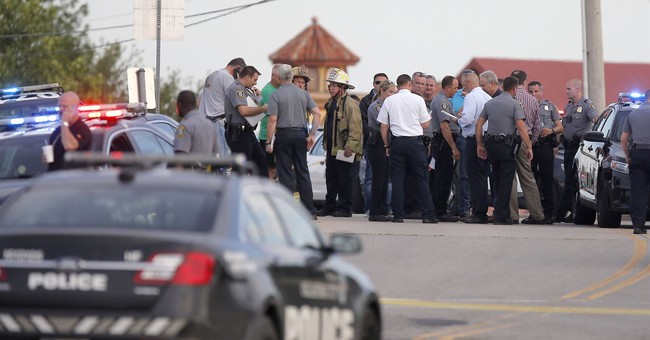 When one man walked into an Oklahoma City restaurant and started shooting Thursday night, two armed bystanders were ready and waiting to stop him. The gunman, Alexander Tilghman, shot two people inside Louie's On The Lake, a restaurant located on Lake Hefner. The two victims, a woman and a female juvenile, underwent surgery but are going to survive. Another person was injured trying to escape. When the gunman walked back out into the parking lot, two armed people, Juan Carlos Nazario, 35, and Bryan Wittle, 39, shot him dead.

Lake Hefner shooting update: A man walked into the Louie’s restaurant and opened fire with a gun. Two people were shot. One person has been taken to a hospital with serious injuries. A bystander with a pistol confronted the shooter outside the restaurant and fatally shot him.

Social media users were shocked to find that media were running the story sans editorialized headlines.

Hell has frozen over. pic.twitter.com/PagB6kRg0R

At this point, a motive is still unknown. In a new message Friday morning, the Oklahoma City Police Department announced that the three individuals who were injured in the restaurant are "in good condition."

May 25, 2018 / 9:19 am: Official news release regarding last night's shooting at Lake Hefner. Press conference will be carried live on our Facebook page at 11:30 this morning. pic.twitter.com/i06ytafSlz

The police are investigating the incident. They "have no reason to believe this is a terrorist type of incident,” according to police spokesman Capt. Bo Matthews.