Meghan McCain Sounds Off on White House Aide on 'The View' 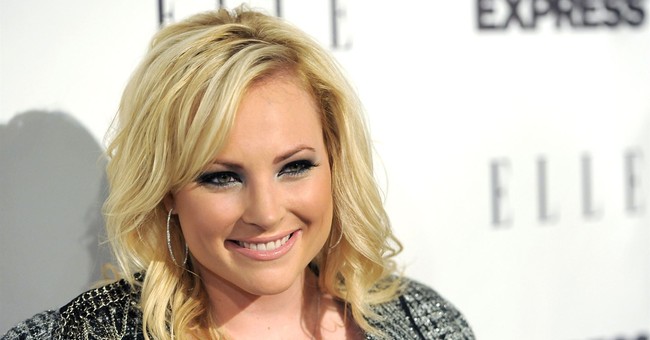 Kelly Sadler, who works for Trump's communications teams, chose to respond to McCain's opposition to CIA Director Gina Haspel by mocking his battle with brain cancer. “He’s dying anyway,” she said Thursday. The comments were confirmed by a White House official and were widely reported.

McCain's wife Cindy shared a simple message for Sadler on Twitter when her remark was leaked.

"The View" host Meghan McCain, meanwhile, used her ABC talk show to respond to the aide's insensitive comments about her father.

.@MeghanMcCain to White House aide who dismissed her father as "dying anyway": "It is not how you die, it is how you live." https://t.co/LeqlQCRybN pic.twitter.com/yXCeaeca1F

"Since my dad has been diagnosed, I feel like I understand the meaning of life," McCain said. "It is not how you die, it is how you live."

She went on to praise her dad's "character and bipartisanship."

McCain added that she doesn't know how a White House employee can make such a comment and still have a job the next morning.

.@MeghanMcCain on White House aide who dismissed her father John McCain as "dying anyway": "I don't understand what kind of environment you're working in when that would be acceptable and then you could come to work the next day and still have a job." https://t.co/LeqlQCRybN pic.twitter.com/lyqJFOMXo2

Sadler, meanwhile, has reportedly apologized for her offhand remarks.

The rest of "The View" co-anchors commended McCain's character and career.

"He is the example of American patriotism," according to Joy Behar.

Whoopi Goldberg and Sunny Hostin responded to another unfortunate comment about McCain. Retired Air Force Lt. Gen. Thomas McInerney, a guest on Fox Business, said this week that it was clear McCain's torture as a POW in Vietnam worked. That's why they call him "songbird John." Hostin said the comment "infuriated" her, while Goldberg instructed the network to be more vigilant about screening its guests. She "doesn't understand" how they allowed McInerney to get on the air. Fox Business has since banned him from the network.

"It seems like we lost all sense of decency and decorum," Goldberg said.