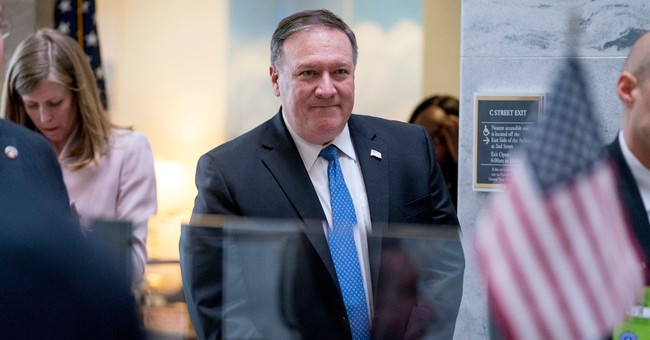 For the first time since 1945, it appears the U.S. secretary of state nominee doesn't have the support of the Senate Foreign Relations Committee. The nominee, current CIA director Mike Pompeo, doesn't need the committee's blessing to still be confirmed (Senate Majority Leader Mitch McConnell plans to hold a Senate vote on Pompeo's confirmation this week), but it sets an unfortunate signal.

"We certainly hope that some members will change their minds," White House Press Secretary Sarah Huckabee Sanders said on "Fox and Friends" Monday.

Sanders urged Democrats to put the safety and security of the country ahead of their "political games." It would be particularly "dangerous" for Democrats to impede the progress Pompeo has already made with North Korea, she said. We recently learned that Pompeo had a secret meeting with Kim Jong Un over Easter weekend. It was a precursor to the summit the White House is planning with him. Over the weekend, President Trump announced that North Korea had agreed to halt its nuclear and missile tests.

Sanders called out Democrats, but a few Republican senators are also unsure about supporting Pompeo. Sen. Rand Paul (R-KY), for one, is no fan of his hawkish foreign policy record.

The White House has some relevant context to use as pushback for these resisting lawmakers. As NBC News noted, 14 Democrats supported Pompeo during his CIA confirmation last year. As for Sen. Paul, can he really vote for John Kerry and vote against Pompeo?

Via colleague Blake Burman. WH’s Marc Short: It would be..surprising..to see Rand Paul vote for John Kerry for SecState and yet against Mike Pompeo so we still believe that there's a good chance that Rand will see the inconsistency in those votes and vote for Mike this afternoon