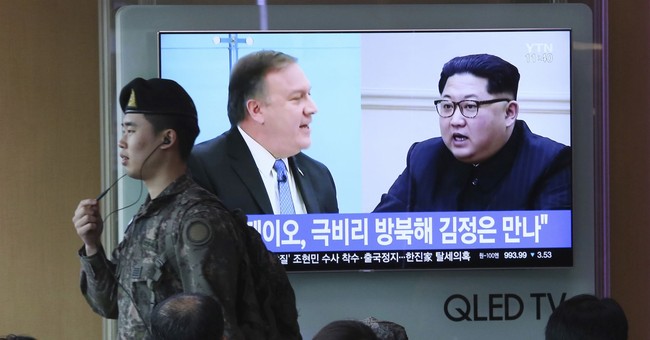 So, it would appear that CIA Director Mike Pompeo, who’s been nominated to replace ex-Secretary of State Rex Tillerson, is getting a head start on his potential new job. The Washington Post reported last night that he went on a secret diplomatic mission to North Korea to meet with its leader, Kim Jong Un. This mission was executed shortly after Pompeo was formally nominated to replace Tillerson, whose departure had been the point of speculation for weeks. In fact, Pompeo read the tea leaves, preparing for months for the possibility that he could be tapped to be our next top diplomat. President Trump appears to have mentioned (UPDATE: He's confirmed it) the covert trip in his remarks at Mar-a-Lago, where he’s hosting Japanese Prime Minister Shinzo Abe (via WaPo):

Mike Pompeo met with Kim Jong Un in North Korea last week. Meeting went very smoothly and a good relationship was formed. Details of Summit are being worked out now. Denuclearization will be a great thing for World, but also for North Korea!

CIA Director Mike Pompeo made a top-secret visit to North Korea over Easter weekend as an envoy for President Trump to meet with that country’s leader, Kim Jong Un, according to two people with direct knowledge of the trip.

The extraordinary meeting between one of Trump’s most trusted emissaries and the authoritarian head of a rogue state was part of an effort to lay the groundwork for direct talks between Trump and Kim about North Korea’s nuclear weapons program, according to the two people, who spoke on the condition of anonymity because of the highly classified nature of the talks.

The clandestine mission, which has not previously been reported, came soon after Pompeo was nominated to be secretary of state.

“I’m optimistic that the United States government can set the conditions for that appropriately so that the president and the North Korean leader can have that conversation [that] will set us down the course of achieving a diplomatic outcome that America so desperately — America and the world so desperately need,” Pompeo told the Senate Foreign Relations Committee last week during his confirmation hearing.

Speaking at his Mar-a-Lago resort on Tuesday, Trump appeared to allude to the extraordinary face-to-face meeting between Kim and Pompeo when he said the United States has had direct talks with North Korea “at very high levels.” The president didn’t elaborate.

The Post added that the White House and CIA decline to comment, the meeting between the Koreas and the U.S. could occur in June, maybe sooner, and that officially ending the Korean War is on the agenda. Negotiations over denuclearization remain another top action item.

South Korea has given President Trump a huge amount of credit for jumpstarting bilateral talks that defused a lot of tension on the peninsula prior to the 2018 Winter Olympics. This was partially spurred by the new sanctions the Trump White House hurled at the communist state for their missile testing and nuclear ambitions.

This whole Korean affair is just odd and a bit funny. Liberals and anti-Trumpers actually thought nuclear World War III could occur because of Trump’s tweets. For a brief period, people actually took Kim Jong Un’s threats of American destruction seriously. We shouldn’t. It’s the same old crap they’ve been saying for decades—and the markets knew it as well. There was no significant slump when Trump prodded Kim, calling him rocket man, threatening massive retaliation should the U.S. be hit, and poking fun of his weight. Trump is insane. He’s unhinged. But he’s managed to bring the North Koreans to the table, another incident to be marked in the ‘Obama couldn’t have managed it’ file. Then, after all of this talk about cozying up to dictators, the liberal news media goes all soft and rosy on the North Koreans at the Winter Olympic. From their creepy cheerleaders to Kim’s sister, Kim Yo-jong, it was puff piece and whitewash central for the news media. The media was lockstep: Who cares if North Korea has an appalling record of human rights abuses, they don’t like Trump, so let’s go with that angle.

In doing so, the news media ignored that past cheerleaders were sent to prison camps for talking about what they saw in South Korea. Some publications had the temerity to suggest that the communist state, and world’s largest prison, won the “diplomatic gold.” Oh, and Kim’s sister gave Vice President Mike Pence the death stare, which is fine because he doesn’t like gay people. Our athletes we sent also weren’t happy to represent the U.S. They made their feelings known. And they all failed miserably. From the speed skater who complained about the coin toss that denied him the honor of being the flagbearer to spazz attacks over anything related to Trump from our atheletes we sent to South Korea, all of them failed. The U.S. had their worst showing in years, maybe we should call it the Trump curse, but back to the media acting like morons, only BuzzFeed, of all publications, were the ones who noted that North Korea enslaves its own people, have gulags, made a note that Kim’s sister is part of the Propaganda and Agitation Department, that her brother probably killed his half-brother with VX gas, and North Korea has been blamed for the death of U.S. college student Otto Warmbier.

Welcome to the liberal media in the age of Trump, where nations with egregious human rights abuses get the massage parlor treatment. If anything, that the fact that these talks are even happening is a win for Trump since, let’s face it—no one thought this was going to happen. Also, this news should give more urgency to confirm Pompeo, who could be heading for the rough, as Democrats begin to line up against his nomination. Funny how this dropped right about now, huh? Will the Left endanger us to ensure a Trump nomination defeat? I wouldn’t put it past them.

"I will oppose that nomination. I believe that Director Pompeo has shown a disdain for diplomacy putting military action at a higher priority."

–@SenBlumenthal on Pompeo's nomination for Sec. of Statehttps://t.co/WOwvasIKgN

Literally spent his Easter on a diplomatic mission to engage Kim Jong-un to prevent war and create a peace settlement, but hey ... https://t.co/i8IPDAdiPY