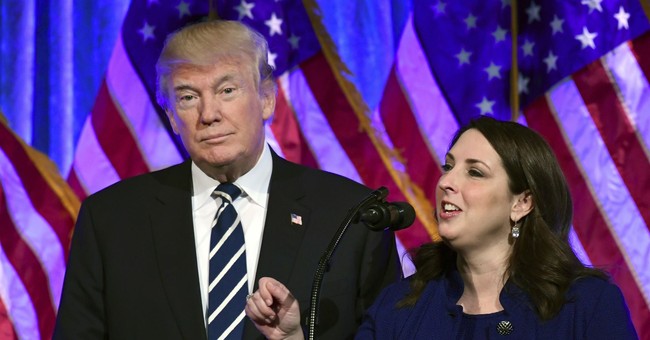 The Republican National Committee's money chest has been plenty full for the past year. Since Ronna Romney McDaniel has taken over as chair, the committee has been breaking fundraising records nearly every month.

February was no exception.

McDaniel credited the president's policies for their fundraising success.

"Thanks to the unwavering support of President Trump’s pro-growth agenda, the RNC continues to work with President Trump and Congressional Republicans ahead of the 2018 midterm elections," she said in a statement Tuesday. "The RNC’s ongoing investments in a permanent ground game and data operation will help our Party win elections and keep Republican majorities as President Trump fulfills promises made to the American people."

Their haul is even more impressive when compared with their counterpart. The Democratic National Committee has been struggling in recent months. In fact, their December fundraising numbers were so bad that the Democrats quietly released it during President Trump's State of the Union address. That report revealed the Democrats raised $5.2 million for the month, but finished the year with $6.1 million in debt.

January was no better. While the RNC raised over $12 million, the DNC raised just over $6 million.

With the RNC's full pockets, it is preparing a robust ground game ahead of the midterm elections, adding almost 200 new staffers to their field program. NBC News profiled their "sophisticated" preparation.