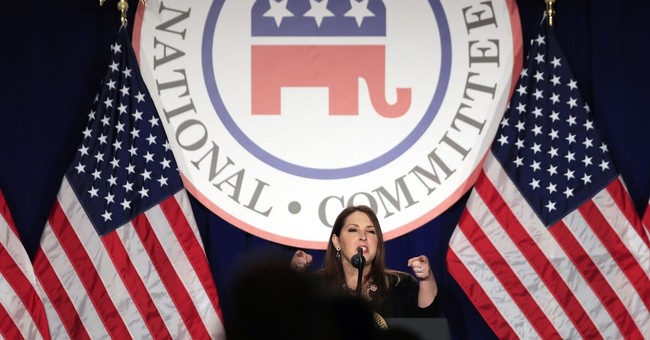 The Republican National Committee has made significant strides since 2012. So much so that it earned a positive profile from NBC News. The report details how the committee is beefing up its staff and looking good heading into the midterms.

The confident committee is expected to add 170 more field staffers by the end of March, and 200 more by the end of the summer. Some of these employees come from the Republican Leadership Initiative, which has trained 9,000 party volunteers since last January. It is an impressive effort, especially when compared to how far behind they were the Democrats in the 2012 election, NBC notes.

While Democrats under President Barack Obama earned a reputation for running a superior "ground game," the RNC has spent years quietly building a sophisticated field program that was credited with helping Donald Trump, whose stripped-down campaign lacked the capacity of most modern presidential campaigns.

The RNC raised $132.5 million in 2017 - a record for a non-election year. No wonder RNC Chairwoman Ronna McDaniel said they are feeling good ahead of the November midterms.

"As we head into the 2018 midterm elections, the Republican Party continues to break fundraising records," RNC chairwoman Ronna Romney McDaniel said in a statement. "We are working hand-in-hand with Republicans in Congress and President Trump to enact a pro-growth agenda on behalf of the American people. In doing so, we will continue to invest in our ground game, data operations, technology, and Party infrastructure to win elections in 2018 and beyond."

The story unfolding at their counterpart's headquarters is not quite so rosy. Under Committee Chair Tom Perez, the DNC has struggled mightily with its fundraising. The Democrats' $4.3 million in May was its worst haul since 2003. There were several other poor FEC reports in the succeeding months.

With these numbers, Perez raised some eyebrows when he claimed the DNC had its best January in history. In reality, the committee raised $6 million, well below the $13.2 million it raised in January 2012.

"Tom meant to say that we raised more money in January than we had in any January since 2012," DNC spokesman Michael Tyler later clarified.

To put it in perspective, when debt is a consideration, the RNC has 23 times more cash on hand than Perez's party.