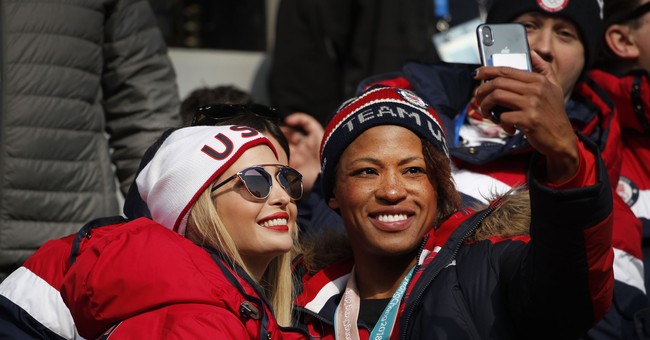 Bobsledder Lauren Gibbs has no regrets for her fun photo session with First Daughter Ivanka Trump at the Pyeongchang Olympics. Trump, who arrived in South Korea as part of the U.S. delegation for the Games, greeted athletes Sunday before the closing ceremony.

Some Olympians like Gus Kenworthy gave her an icy reception, asking her on Twitter what the "F" she was doing there. But silver medal-winning bobsledder Lauren Gibbs took a different course. She warmly welcomed Ivanka and White House Press Secretary Sarah Huckabee Sanders and at one point let Ivanka wear her silver medal.

When the rebukes started rolling in, Gibbs didn't apologize. She stood her ground and explained over and over again that pride in one's country should come before any petty political differences. Name calling and nastiness solve nothing.

Hate comes from both sides. That’s the point no one is innocent so we need to start learning how to communicate

Not complicit, just hoping that there is a better way... idealistic... Maybe but I would rather go that route than the back and forth name calling... ???????

When some especially offensive reactions arrived on her Twitter timeline, she showed off her snark.

We have a fortune teller on our hands...

But, she always kept her eyes on the main message.

Another American bobsledder, Nate Weber, was proud to share a photo he took with Ivanka. Regardless of your politics, he wrote, he was appreciative of how sweet she was with his children.

Thank you, Lauren and Nate, for representing us so well on the world stage.