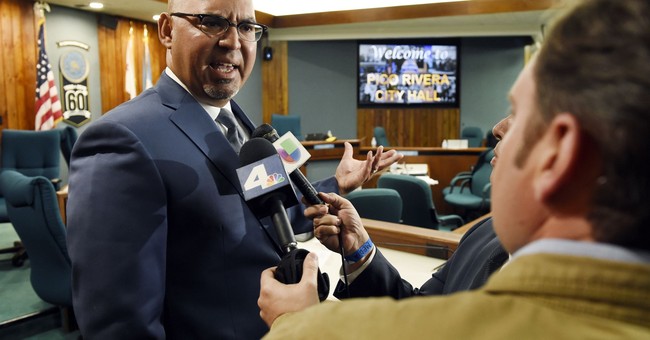 Gregory Salcido, a teacher at El Rancho High School in Pico Rivera, California who was busted for an anti-military rant captured by a student, doesn't seem to have too many regrets.

First, a reminder of what he thinks about our men and women in uniform.

“Your freakin' stupid Uncle Louie or whatever," Salcido said to a student who was wearing a U.S. Marine Corps sweatshirt. "They're dumb sh*ts. They're not high-level bankers. They're not academic people. They're not intellectual people. They are the freakin’ lowest of our low. Not morally, I'm not saying they make bad moral judgements.”

The incendiary comments were all captured in a video recording. After they were made public, Salcido was placed on leave from the school.

He has not apologized for his comments, only to those who may have been offended by them. On Tuesday, he reiterated that young people who decided to suit up are less educated than their peers. He would rather encourage graduates to go to college.

Remember the teacher who called military members ‘lowest of the low’…now he’s defending his comments. Your thoughts? pic.twitter.com/P8xHFxuku0

“I don’t think it’s at all a revelation that those who aren’t stellar students usually find the military a better option,” he said. “That’s as plain as it’s Tuesday night.”

“Nothing” of what he said, however, had anything to do with their “moral character.”

Despite pressure from his colleagues, who voted to condemn Salcido and ask for his resignation, he is refusing to budge from his post as a councilman. They can't force him from his post, but Mayor Gustavo Camacho is trying to censure him to make sure he cannot participate in city committees and appointments.

Salcido's remarks made their way to the White House, where Chief of Staff John Kelly said he could "go to hell."