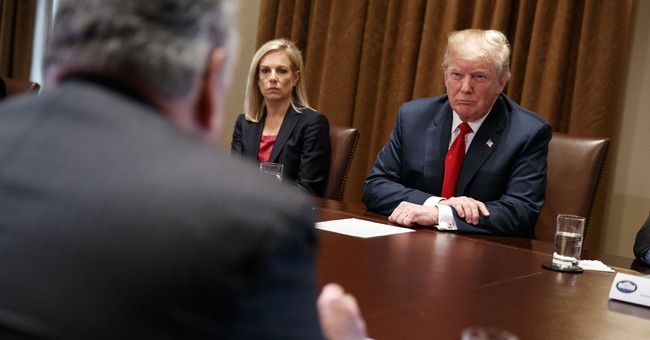 CNN political analyst and Playboy correspondent Brian Karem by all accounts appears to be no fan of the Trump administration, having sparred multiple times with Press Secretary Sarah Huckabee Sanders. Last June, when she was still deputy press secretary, Karem accused her and other Trump associates of "inflaming" the press corps by repeatedly calling them "fake news." He also called her a bully at one point.

Still, his hot take about President Trump's immigration plans was a bit farfetched. Earlier this week, Trump said if Congress can't find an agreement on the Deferred Action for Childhood Arrivals program, "let's have a shutdown." Karem offered his response on CNN, suggesting that Trump believes every immigrant is a cold blooded murderer.

“Every immigrant in this country isn't a killer and thug and a thief and he’s kind of equated all immigrants, put them in that status when, actually, the crime rates in the immigrant communities are much smaller than in the general communities,” Karem told CNN's Brooke Baldwin. "So, that’s a disingenuous statement and let’s have a shutdown."

Karem and Baldwin later expressed their shock over Chief of Staff John Kelly's comments about Dreamers who haven't signed up for government protections under DACA. Kelly suggested to reporters that some are "too lazy to get off their asses" to sign up. Karem contrasted Kelly's language with the Bible.

"Give us your tired, your poor, your huddled masses yearning to breathe free," he said. "Oh, hell with it. They're too lazy to get off — arses. What?"

Karem had a suggestion as to why some Dreamers are not signing the paperwork. Maybe they're afraid of Trump?

"I mean, for the love of heavens, to sit there and say they're too lazy to — maybe they're too afraid of what's happening in this country. Maybe they're scared. I have dealt with stories in Montgomery County, Prince Georges County, Maryland, where people are afraid they're going to be shipped out at any day and they've been here for, you know, what, 20, 30, 40 years. That’s — there's a palpable, real fear brought about by this administration and this administration has a disconnect between the things that they do and say and what happens when they do and say them and they haven't come to grips with that yet."

Congress has until March 5 to come up with a solution for DACA. The immigration issue was not included in the compromise struck by Sens. Mitch McConnell and Chuck Schumer Thursday, to Nancy Pelosi's dismay. House Speaker Paul Ryan is on board, though, and he said that he has the votes.