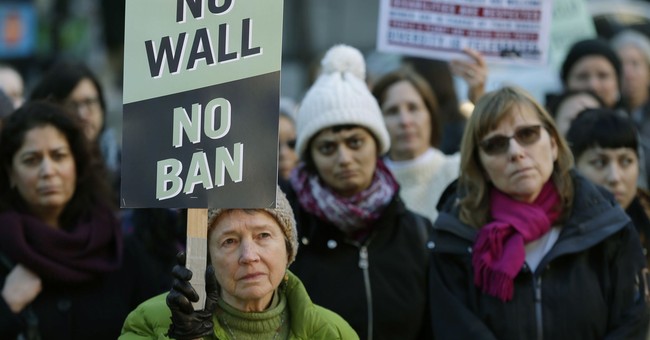 President Trump's ban on six Muslim-majority countries in Africa and the Middle East was heard by the Fourth Circuit Court of Appeals in Richmond, VA Friday. The 13-judge panel was asked to reverse a Maryland judge's decision in October to block the ban. Trump and his administration say they enforced the ban for national security reasons, yet the judges were concerned about certain Trump tweets that could be perceived as anti-Muslim.

"While the president may be showing anti-Muslim bias in his tweets, that cannot be taken into consideration over the content of the proclamation? It has to be viewed based on its language?" Judge Barbara Keenan asked.

"Do we just ignore reality and look at the legality to determine how to handle this case?" Judge James Wynn asked.

"It's clear on the record that the president has continued to make statements of hostility toward Muslims," according to Cecillia Wang, a deputy legal director at the national American Civil Liberties Union, said during her argument before the court.

Mooppan pushed back at that assumption. The Trump administration believes it's necessary for this ban because the countries listed are not adequately sharing security information with the United States, he said.

The travel moratorium affects travelers from Chad, Iran, Libya, Somalia, Syria and Yemen. It has been challenged in courts all across the United States since its initial rocky implementation, when airports were confused and left without instruction. People stormed JFK, Dulles International Airport, etc. protesting the ban. The Trump administration could not ignore the outcry and shortly thereafter released a second travel order, taking Iraq off the list of banned countries and carving out exceptions for green card holders.

The Supreme Court allowed the third version of the ban, which added North Korea, Venezuela, and Chad to the list, to go into full effect earlier this week.