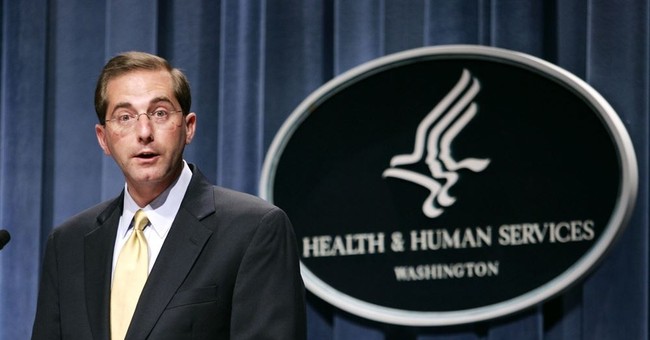 President Trump aims to fill the role of Health and Human Services Secretary, vacant since Tom Price resigned in lieu of reports about his questionable travel records.

In a tweet posted Monday morning, Trump said he has his new guy.

Happy to announce, I am nominating Alex Azar to be the next HHS Secretary. He will be a star for better healthcare and lower drug prices!

Azar worked at the pharmaceutical company Eli Lilly for ten years until leaving this past January. That bout of employment is worrisome for some Senate Democrats. Sen. Ron Wyden (OR), for instance, spoke for many of his colleagues when he wondered how Azar could faithfully work to bring down prescription drug prices given his former employment.

.@realDonaldTrump hasn’t done a thing to bring down drug prices. Today, he nominated a pharma executive to lead @HHSGov. pic.twitter.com/1HPIVeCLRK

A civil rights lawyer even did some digging to find that Eli Lilly had been accused of driving up the cost of insulin.

Alex Azar - new nominee to replace disgraced Tom Price at HHS. During Azar's time at Eli Lilly, his company was alleged to have engaged in collusion to drive up the cost of insulin. Lilly is now under investigation by State Attorneys General over insulin pricing. https://t.co/04Hp32GcjP

Azar, who currently works for a consulting firm, worked as the HHS general counsel from 2001 to 2005 in the George W. Bush administration. His former colleagues note that Azar's work on regulatory reform could be beneficial for an administration trying to undo Obamacare (so far a failed effort.)

Azar served as HHS’s No. 2 under Secretary Mike Leavitt, who said he asked Azar to oversee the department’s regulatory process.

“He understands the process and he knows the levers and how you make it work and where the potential roadblocks are,” Leavitt said. “I think he would be of particular value given the fact that ... so far a repeal bill has not occurred and they’re going to need to make their imprint on existing laws through replacing the ideology underpinning it.”

Democrats like Wyden, however, expect Azar to "faithfully implement" the Affordable Care Act.