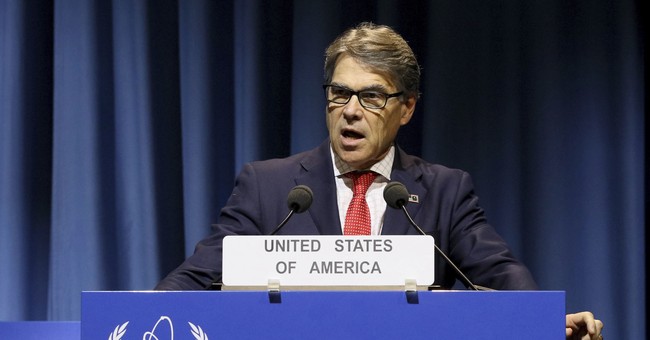 You may have seen headlines over the past 24 hours reporting that Energy Secretary Rick Perry said fossil fuels can prevent rape in Africa.

"Energy Secretary Rick Perry Says Fossil Fuels Prevent Sexual Assault," according to NBC News. That headline was only slightly tweaked by the likes of the BBC, USA Today, and the Chicago Tribune.

The Federalist's Julie Kelly is here to tell you that those headlines are misleading and simply not true.

First, the secretary's remarks, which he made at an energy summit on Thursday:

I just got back from Africa…I think I heard a lady say that there are people dying. Let me tell you where people are dying…in Africa because of the lack of energy that they have there. And it’s gonna take fossil fuels to push power out to those villages in Africa, where a young girl told me to my face ‘One of the reasons that electricity is so important to me is not only because I won’t have to try to read by the light of a fire, and have those fumes literally killing people, but also from the standpoint of sexual assault.’ When the lights are on, when you have light, it shines the righteousness, if you will, on those types of acts. So from the standpoint of how you really affect people’s lives, fossil fuels is going to play a role in that. I happen to think it’s going to play a positive role.

Perry's comments were "slightly clumsy," Kelly acknowledges, but hardly sinister. Liberal journalists ignored his clearly compassionate tone, she argues. What's more, he actually made some sense. Of course, turning the lights on will not directly stop cases of sexual harassment and rape, but a lack of electricity is a major problem in Africa that is certainly not helping the epidemic.

"It is also just common sense to suggest the light generated via electricity is desperately needed throughout this dark continent for a number of humanitarian purposes, including keeping vulnerable populations such as young girls safe at night," Kelly writes.

Nevertheless, groups like the Sierra Club are demanding Perry resign over his "twisted remarks."