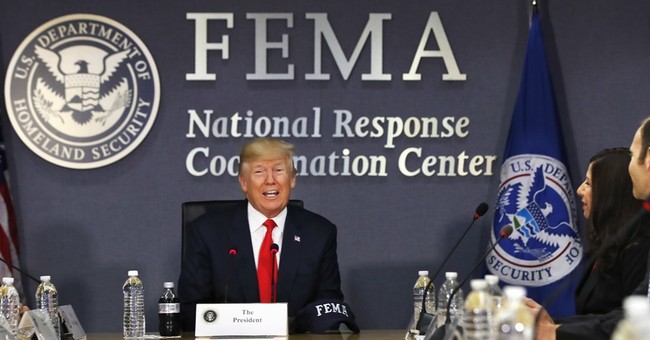 Hurricane Harvey has already claimed the lives of five people and is leaving catastrophic flooding in its wake. Instead of coming together in this time of need, liberal pundits are finding ways to blame President Trump for one of the worst natural disasters in history unfolding on the Texas coast.

MSNBC's Joy Reid thought it was an apt opportunity Sunday to blame the Trump administration for failing to appoint a FEMA director. How could he leave such an important position open? she demanded.

Actually, there is a FEMA director. Reid was forced to issue the correction, but not before thousands of social media users were misinformed.

Reid was a little too trigger happy to cast blame on the current administration. She also retweeted a social media user who suggested Trump should stop funneling money into his policy proposals and use it for better flooding infrastructure instead.

Then you have Bloomberg's Margaret Talev, who is among those who think Trump is a little too optimistic in his responses to Hurricane Harvey. The president has been sending messages of encouragement to the first responders and search and rescue teams descending on Texas, commending them for their "teamwork!" However, Talev is under the impression that Trump is being too much of a "cheerleader" and doing the opposite of helping.

FEMA Administrator Brock Long has a different take. On cable news Sunday, he thanked the president for being so "engaged" during the disaster relief efforts. They certainly need a listening ear and a helping hand right now. The tropical storm is expected to be the worst disaster Texas has ever seen. It will take years to recover and rebuild. Long did note there were vacant positions in FEMA, but he was confident in his current team's passion and diligence.