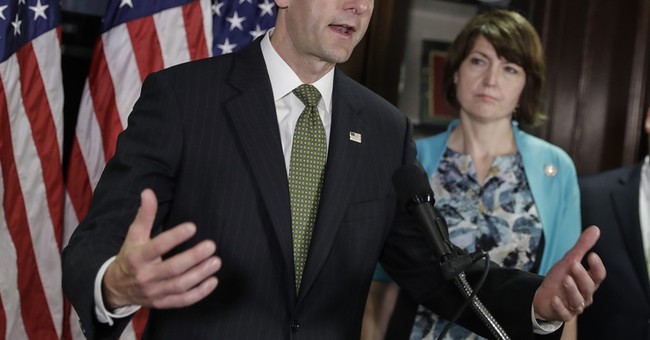 Speaker Ryan addressed Congress after the attack on congressmen and senators at the congressional baseball practice Wednesday. He first commended U.S. Capitol Police officers David Bailey and Crystal Griner for putting their lives on the line to protect the victims. They were both shot, but are in stable condition.

“Without these two heroes, many lives would have been lost,” Ryan said.

"An attack on one of us is an attack on all of us," the speaker said, which was met with a standing ovation.

While Ryan’s speech was somber, he snuck in a lighthearted moment by noting that Scalise is likely “really frustrated” that he won’t be able to play in Thursday’s game.

“There are so many memories that we may want to forget,” Ryan continued. Yet, there are others they will want to remember. Ryan reflected on a powerful photo he saw this morning, which showed Democratic colleagues gathered in prayer for their Republican colleagues.

“Every day we come to challenge each other to fight for the things we believe in,” Ryan said. “But we do not shed our humanity when we enter this chamber. We are one family. These were our brothers and sisters in the line of fire.”

Rep. Joe Crowley (D-NY) told Fox News Wednesday afternoon that he told Speaker Ryan he did them all “proud” with his sincere remarks.

Pelosi followed Ryan and said something she’s “never said before.” She “identifies herself with the remarks of the speaker.”

She paid tribute to the police force and said she was praying for President Trump – specifically that “his presidency will be successful and that his family will be safe.”

The shooter’s action “was so cowardly,” she said. But, it will not stop Thursday’s charity game.

“Tomorrow we’ll go out on the field,” Pelosi said. She and her colleagues will use today’s incident “to bring us together and not separate us further.”