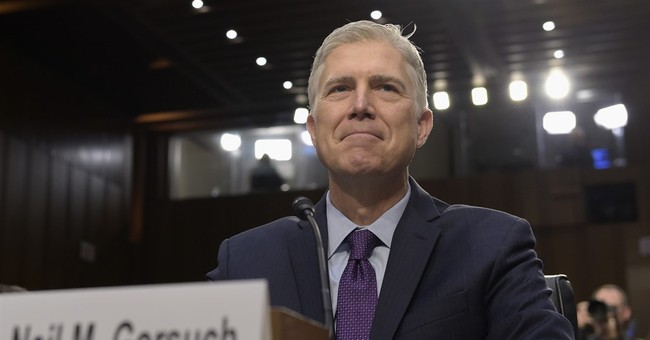 Neil Gorsuch has taken the first oath to become the 113th justice of the Supreme Court. Chief Justice John G. Roberts Jr. administered the oath in a private ceremony at the Supreme Court building.

Gorsuch participated in a second ceremony at the White House Rose Garden, where he was sworn in by Justice Anthony M. Kennedy. President Trump introduced the new Supreme Court justice as a man who is “deeply faithful” to the Constitution. Gorsuch relies “not on his personal preferences,” Trump noted, “but a fair and objective reading of the law.”

Trump saved special thanks for Senate Judiciary Committee Chairman Chuck Grassley for holding a "fair hearing" and Senate Majority Leader Mitch McConnell for his efforts this past year in ensuring that his predecessor would not hurry through a nominee in his last year in office. Guy has a detailed, inside look at how the majority leader succeeded in his "election year gamble."

Gorsuch’s swearing in is an historic first for the Supreme Court. Gorsuch will be the first justice to serve with someone for whom he once clerked. He was a law clerk for Justice Kennedy from 1993-94.

“I am humbled by the trust placed in me today,” Gorsuch said after officially becoming a Supreme Court justice. Gorsuch, who is replacing the late Antonin Scalia, noted he "will never forget that the seat I inherited today was the seat of a very, very great man."

Gorsuch was confirmed by the Senate on Friday by a narrow vote of 54 to 45. Because the Democrats followed through with their filibuster threat, Republicans had to go "nuclear" to change Senate rules to ensure Gorsuch only needed 51 votes for confirmation.