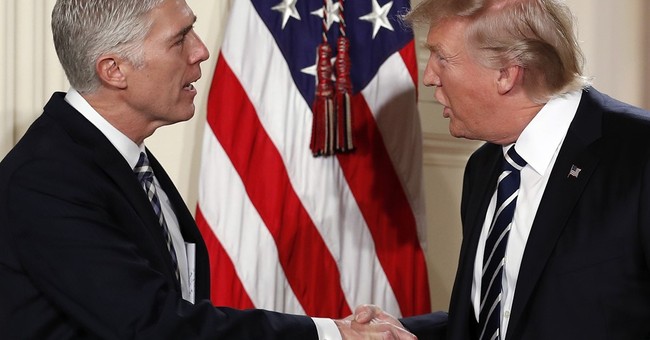 President Donald Trump's outstanding first nominee to the United States Supreme Court, Judge Neil Gorsuch, has been confirmed by the Senate.  Just a tiny handful of Democrats (update three) joined united Republicans to approve his confirmation 54-45, which came one day after Mitch McConnell's caucus applied Democrats' Reid Rule to change the legislative body's filibuster rules. That controversial move came as a direct result of decades of unilateral escalations by the Democratic Party -- with their unjustified and unprecedented nuclear option in 2013, and their unjustified and unprecedented partisan SCOTUS filibuster this year being the most intolerable recent examples. They set the table for this result:

And a very special THANK YOU to @SenatorReid! ??


Sen. Mitch McConnell in particular should be commended for staring down the Democrats over this seat. Having witnessed the aforementioned years of self-serving provocations, and with with Reid's power grab fresh in his mind, the Republican leader declined to fill the vacancy left by the death of Justice Scalia during a contested election year. This was a hardball move, even if it wasn't unprecedented, and even if the record is quite clear that Democrats would have been the exact same thing under similar circumstances. McConnell endured endless carping from his colleagues across the aisle, kept GOP dissent to a minimum, and ignored Democrat-friendly objections from the press. He also took a big gamble; if Hillary Clinton had won the presidency, as many expected, she could very well have withdrawn the nomination of the relatively moderate Merrick Garland and replaced him with a stronger leftist. And Senate Democrats, who many anticipated would regain the majority, were ready to expand the Reid Rule to ram that new nominee through.

McConnell's historic gamble paid off in spades after Trump won, and Democrats' foolish strategic decision to filibuster an unquestionably qualified and impressive man in Neil Gorsuch was an added bonus. Why? I reported weeks ago that a very well-placed source told me that another vacancy could open up as soon as this summer. The red hot rumor was that Justice Anthony Kennedy, the Court's swing vote, is preparing to retire. Those whispers are growing louder; I've heard (unconfirmed) that McConnell urged his members to 'go nuclear' on Gorsuch because Democrats' miscalculation could result in a two-for-one package. Rip off the bandaid, then get two justices in the same calendar year.  We shall see.

Meanwhile, the future of the Senate looks bleak. Liberals, enraged by their own tactics being used by the "bad guys," are already vowing fresh escalations next time they're in power; calls to abolish the legislative filibuster are commonplace, with lefties chest-thumping about passing long-sought legislation like single-payer healthcare with just 51 votes. They will certainly be back in power someday, but so will Republicans after that.  And now the Left has been put on notice that these things cut both ways. If they pursue hardcore statist policies without a filibuster backstop, the GOP could pursue any number of priorities under the same threshold, such as outlawing government unions, converting the whole country into a right-to-work zone, or barring late-term abortions.  Use your imagination for any number of additional examples. Lefty Twitter was also buzzing at the fringes about unilaterally adding justices to the Supreme Court, even without any vacancies -- an outrageous Court-packing scheme attempted by FDR, who failed.

Regardless of what may play out in the near or distant future, the institution of the US Senate has been irreparably eroded. Despite my forceful advocacy of behalf of the imposition of the Reid Rule (after long opposition to abuse of the judicial filibuster by both sides), I cannot celebrate this week's precedent. It's damaging to the Senate and signals the further decay of the republic. What I can celebrate is the confirmation of Judge Gorsuch -- with a strong hope that the Democrat-forced new standards will allow the installation of at least one more conservative justice during Trump's first term, along with dozens of crucial low court federal judges. And I can also celebrate that Republicans finally decided to look at these high-stakes battles through the Democrats' zero-sum lens. It's not a healthy outlook for either party, but it's grossly unfair for only one side to operate under that mentality, learning the lesson that they'll only meet passive acquiescence or too-little-too-late retaliations from time to time. In other words, I don't like what Republicans did this week, but in light of the relevant history and the absolute inevitability of Democrats taking the next step as soon as possible, it had to be done.  Now get to work, Mr. Associate Justice:

This means J. Gorsuch will be on the high court in time to hear argument in Trinity Lutheran, an important religious and equal rights case. https://t.co/zwkYp4udcL