Inside Look: How McConnell Thwarted Obama, Then Saved the Gorsuch Nomination 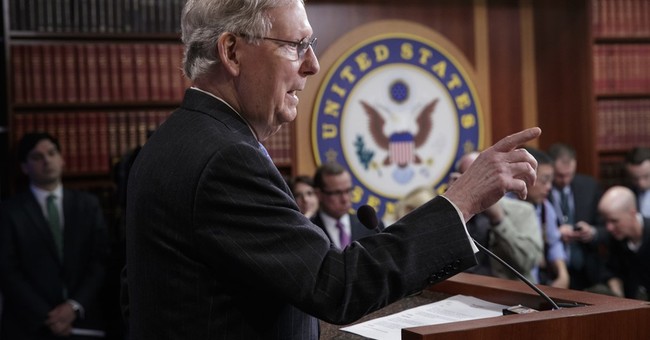 It's a testament to the turbulence in the global affairs and the head-spinning churn of the Trump-era news cycle that the confirmation of a Supreme Court Justice -- featuring a massive fight in the Senate -- was treated like a second-tier story last week. In case you missed it, Neil Gorsuch is joining the Court as an Associate Justice today, filling a seat left vacant by the death of Antonin Scalia in early 2016. As we covered extensively, Senate Democrats mounted an unprecedented filibuster against Gorsuch, whose credentials and suitability for the position were never in question. This was the latest provocation in a decades-long pattern of escalations on judicial nominees, during which Democrats introduced scorched-earth tactics to obstruct or ram through nominees, depending on their political interests and power status.  Republicans finally punched back hard, and justifiably so.  The eventual approval of Justice Gorsuch felt like a fait accompli after his smooth roll-out, and virtually flawless confirmation hearings. But the fate of his nomination was reportedly in some jeopardy as late as early last week. The Weekly Standard's Fred Barnes spoke with the Senate Majority Leader shortly after Congress' upper chamber voted 54-45 to confirm the Coloradan on Friday, detailing how McConnell fought all the way to the finish line to ensure that his enormous election year gamble on Merrick Garland paid off.  Things were dicey for awhile:

In the days before floor debate began, his nomination was in jeopardy. Three Republican senators wouldn't commit to vote for the "nuclear option" to prevent a Democratic filibuster from blocking Gorsuch's confirmation. Susan Collins of Maine and Lisa Murkowski of Alaska, both pro-choice on abortion, raised the fear that ending the filibuster of Supreme Court nominee could lead to an anti-abortion majority on the court. Bob Corker of Tennessee had a different concern. He "waved the banner of tradition," a lobbyist said. He defended the filibuster as a worthy tradition of the Senate that promotes compromise and bipartisanship. Killing the filibuster in Supreme Court nominations could lead to eliminating it entirely, even in debates over legislation. McConnell insists this won't happen. John McCain of Arizona didn't threaten to bolt. But he said in a floor speech that he too wanted to protect "the traditions and practices of the Senate." Only reluctantly had he agreed to vote for the nuclear option. At the heart of the turmoil sat Senate Minority Leader Chuck Schumer. He sought to make a deal with the holdouts. If they joined all 48 Democrats and voted against the nuclear option, he would allow Gorsuch to be confirmed.

So rumblings of that terrible "bargain" were real, it seems. Fortunately, those talks hit a dead end -- with Gorsuch's sheer excellence earning unanimous support among Republicans, plus a small handful of red state Democrats. Immense pressure was brought to bear on "iffy" GOP members like Collins and Corker until they eventually signed on to McConnell's plan to use the Reid Rule to invoke cloture and move to a final floor vote. Reflecting on the victory, McConnell said that his plan relied on never blinking in the face of intra-party squeamishness and inter-party criticism:

McConnell, more than Trump or even the nominee himself, was responsible for elevating Gorsuch, a federal appeals court judge, to the Supreme Court. When Justice Antonin Scalia died in February 2016, McConnell declared the seat would not be filled by President Obama in his last year in office. Democrats complained and Obama nominated Judge Merrick Garland to succeed Scalia. But McConnell prevailed. "The only issue was 'can you take the heat?' " McConnell could. He never flinched. "It is the most consequential decision I ever made," McConnell said [of not taking up the Garland nomination]. And it turned out the open seat was an "electoral asset" for Trump. Voters didn't like him or Hillary Clinton. But once filling the seat became the "principal issue," Trump had the advantage. Everyone knew she would dump Garland, a moderate, for someone further to the left. "We didn't know if the president would be a conservative or not," McConnell said. However, he had promised to pick a nominee from a list of 20 conservative jurists. (McConnell had advocated such a list.) "This reassured conservatives." The result: he got 90 percent of the Republican vote and won. McConnell gave Trump credit for nominating "the single best circuit court judge in the country. It made my job easier." He described the job as "getting all my frogs in the wheelbarrow." On cloture, the nuclear option, and confirmation, he got all 52 frogs. Rather than scrapping tradition, the end of the judicial filibuster restores a longstanding tradition of not using it against nominees for judgeships. That tradition was tossed out in 2003 when Democrats began filibustering Republican nominees.

That final sentence is a key point, as emphasized by two former Senate GOP leaders in a widely-circulated Washington Post op/ed on the eve of the vote.  On Friday, I drew renewed attention to my previous report that well-placed sources believe another Supreme Court seat will open up as soon as this summer, at the conclusion of the current term. Reagan-appointed Justice Anthony Kennedy, the Court's lone true "swing vote," is preparing to retire, according to the persistent rumor. I've learned in recent days that senior lawmakers are also expecting this scenario to play out, hence the urgency of advancing and confirming Gorsuch with a simple majority. Democrats have surely heard these whispers, too, which is why the aforementioned "deal" was floated. It also exposes their decision to attempt their unprecedented filibuster against Gorsuch as exceptionally foolish -- especially in light of reports that a cluster of GOP Senators were uncommitted on Reid's "nuclear option" until very late in the game.

If Democrats had afforded Gorsuch a relatively non-controversial confirmation process (after all, it was simply swapping one conservative for another), it is a very open question whether McConnell would have been able to corral all 52 votes to pass a rules change on behalf of Trump's second pick -- whose credentials may not be quite as sterling as Gorsuch's, and whose presence on the Court would tilt the ideological balance rightward. By picking the fight that they did in order to appease the barking jackals in their base, Democrats ensured that the next pick can get installed on the bench with 50-plus-one votes.  Some Democrats understood this calculation yet plunged over the cliff anyway.  And McConnell sounds like a man who is expecting another SCOTUS nomination in the near future: "I think we're going to see a quality nominee. Even at 51 votes, it's important for the nominee to be of high quality," he said. I'll leave you with Philip Klein's column praising McConnell's resolute and gutsy approach to the Scalia vacancy from wire to wire, the Wall Street Journal calling the Kentuckian's feat his "finest hour," and video of Harry Reid's legacy playing out on the Senate floor late last week, as Justice Gorsuch was confirmed: