Mike Lee Defends Cruz: 'I Held My Tongue For Years' on Boehner 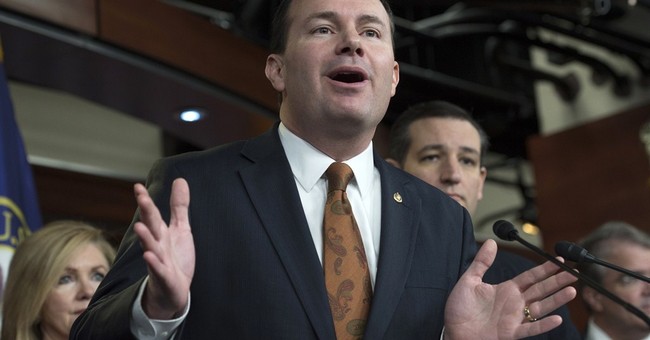 Sen. Mike Lee (R-UT), friend and surrogate to presidential candidate Sen. Ted Cruz (R-TX), is ashamed by what he heard come out of John Boehner's mouth this week. In case you missed it, the former speaker of the house held nothing back when asked to share his true feelings about Cruz during an appearance at Stanford University. The Texas senator, Boehner said, is “Lucifer in the flesh.”

“I have Democrat friends and Republican friends. I get along with almost everyone, but I have never worked with a more miserable son of a bitch in my life," he added.

Boehner may no longer be a government official, but Sen. Lee insists the comments were uncalled for. The senator from Utah recalled how Boehner gave him and his colleagues plenty to complain about - the difference being, they knew better than to engage in such unprofessional behavior.

“I am appalled that John Boehner would do this…I held my tongue for years on John Boehner, even when I disagreed with him.  Because I respected him as a person, and I respected his office enough to not call him out on this personally.  I expressed disagreement with his policy, but I never ridiculed him personally.  The fact that he has done this is appalling, and he should be ashamed of himself, and I demand that he apologize.”

Several Boehner blunders during his tenure as speaker would have justified Lee’s outbursts. For instance, when Boehner removed conservative leaders like Florida Reps. Daniel Webster and Richard Nugent from the Rules Committee, it was viewed as a means of intimidation toward those who didn’t fall in line after the last speaker vote. In 2014, Boehner failed to stop the CRomnibus spending package, which funded all levels of government and did not halt the president’s executive action on immigration. That was just one of several times Boehner punted opportunities to challenge President Obama’s liberal agenda. Instead, he couldn’t wait to share how he “absolutely trusts” the president and enjoys being his golfing partner.

Boehner and other Washington elites, Lee concluded, are criticizing Cruz because he has dared to challenge establishment politics that has jeopardized conservatism.

The question now is: Will Boehner's temper tantrum hurt or help Cruz in the election - particularly among conservative voters?