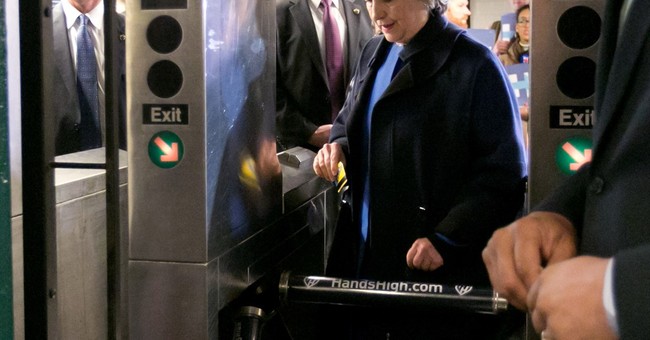 The candidates have all arrived in New York a week ahead of the April 19 primary, each knowing how important an Empire State win is in the 2016 race. Hillary Clinton, Bernie Sanders, Ted Cruz and Donald Trump are touring the upstate region, while John Kasich has been stuffing himself with Italian food in the Bronx.

Donald Trump: Trump was disappointed to find out his own children will not be eligible to vote for him in next Tuesday’s New York primary. Because of election rules that require voters to register months in advance, both Ivanka Trump and Eric Trump will have to stay clear of the polling booth. He is also upset about the fact he came up empty on delegates at this weekend’s Colorado GOP convention. At a campaign rally in upstate New York on Sunday, Trump told the Republican Party what he thinks of their “shenanigans,” believing they have rigged the election results. His supporters agree. Should the party choose a candidate other than Trump, the businessman’s following believe it would be akin to voter disenfranchisement. Despite the grumblings, however, Trump still has a large lead in New York.

Ted Cruz: Cruz gained all of the delegates this weekend from the Colorado GOP convention, where he confidently announced that he has now beaten Trump in 10 elections.

John Kasich: Kasich has been tasting about every Italian dish in the Bronx this week, perhaps thinking New York votes with their taste buds. While the Ohio governor has not picked up a single delegate since March 15, the Michigan delegation on Saturday did manage to snag 17 of his supporters. Kasich remains confident that a contested convention is his path to the nomination.

Hillary Clinton stopped in Buffalo, N.Y. on Friday to try and convince upstate voters that as their senator she helped transform the region. She also criticized Sanders’ free college plan and scoffed at his suggesting she’s not “qualified” to be president. Her campaign's new ad, however, has its sights on Donald Trump. Entitled "Stronger Together," the spot criticizes Trump for his controversial comments on Muslims and abortion. Meanwhile, she received a bit of a lift from President Obama, who on Fox News Sunday insisted the FBI investigation into her emails would not be politically motivated. Yet, he also admitted her using a private server as secretary of state was an example of “carelessness.” Clinton maintains double digit leads in both New York and Pennsylvania, yet after this weekend's defeat in Wyoming it's clear momentum is not on her side.

Bernie Sanders won the Wyoming primary handily on Saturday, making it eight of the last nine Democratic contests in which he’s emerged as the victor. The Vermont senator admitted he inflated the number of people Israel killed during the 2014 conflict in Gaza during his New York Daily News interview last week, but proceeded to tell CNN’s Jake Tapper that Israel’s response was “disproportionate.” In other words, the Jewish senator isn’t exactly proving to be Israel’s closest friend.