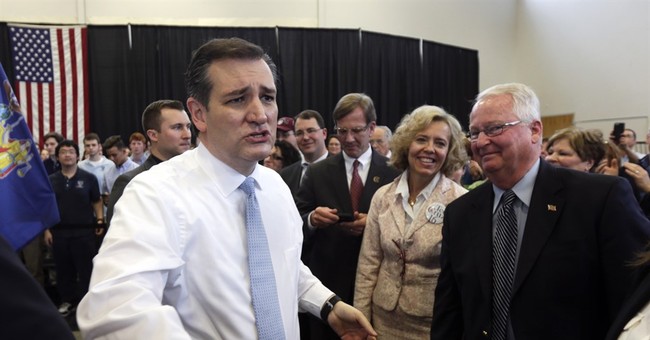 Update: Cruz has claimed all 34 of Colorado's delegates.

“Today was another resounding victory for conservatives, Republicans, and Americans who care about the future of our country," the senator said in a statement. "Utah, North Dakota, Wisconsin, and tonight’s incredible results in Colorado have proven this: Republicans are uniting behind our campaign because they want a leader with real solutions who will bring back jobs, freedom, and security."

Sen. Ted Cruz had already secured the majority of delegates from Colorado ahead of Saturday's state GOP convention. Seventeen of the delegates were formally pledged to him. Four others were placed in his tally but could change their vote in Cleveland.

With this confidence, Cruz addressed the convention Saturday afternoon.

"Here’s the story the national media's not reporting," Cruz told convention goers. "In two weeks, in ten elections in a row, we have beaten Donald Trump. Soon we can say 11."

Cruz repeated his oft repeated slam on Trump by saying anyone can print "Make America Great Again" on a hat, but a leader needs to back up lofty phrases with action.

In addition to the press and Donald Trump, Cruz had a message for Hillary Clinton.

"Hillary wants to move back into 1600 Pennsylvania Av. I have different government housing in mind." @tedcruz #cogop pic.twitter.com/mLgEeOi9Z3

Another snapshot from the convention reveals just how Cruz-friendly the crowd was.

Crowd erupts as @tedcruz wraps up. I think we're looking at a sweep. #cogop pic.twitter.com/N4NKv90sxR

Cruz is expected to win more of Colorado's 13 remaining delegates as the convention finishes voting. Stay tuned for full results.