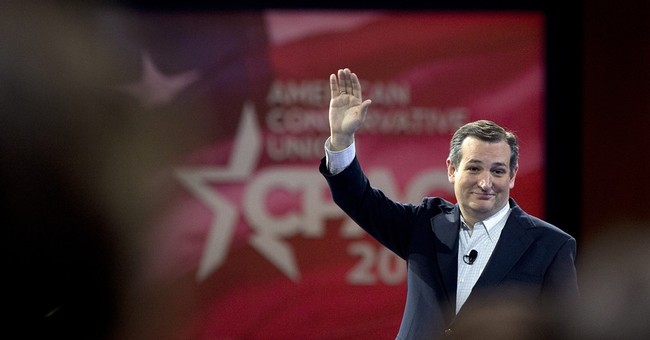 This weekend’s Conservative Political Action Conference in National Harbor, MD gave the 2016 GOP candidates a prime opportunity to rally their base to the polls. Donald Trump, however, canceled his appearance – and Sen. Ted Cruz didn’t let the audience forget.

With the most state victories under their belt, Trump and Cruz have the clearest paths to the nomination – and that’s bad news for the Republican establishment. Here's how this week is shaping up for them and the rest of the field.

Donald Trump: Trump is ready for this to be a two-man race. “I want Ted one-on-one, O.K.,” he said during a campaign event in West Palm Beach, Florida. After winning Louisiana and Kentucky on Super Saturday, Trump said it’s time for Marco Rubio to drop out.

Ted Cruz: Sen. Ted Cruz gave the Trump campaign quite a scare on Saturday, winning both the Kansas and Maine caucuses and keeping Louisiana and Kentucky very interesting. He also won the CPAC straw poll. In other words, the Texas senator’s surge is in full effect. Over at RedState, Leon suggested it’s time for Republicans to unite behind Cruz if they have any chance of defeating Trump.

Marco Rubio: Rubio is trying to erase his bad Saturday night from memory by focusing on improving numbers in Florida. The latest poll has him within just 5 percent of Trump. Pundits are suggesting he has to win the state in order for him to even consider staying in the race. Rubio also gained some needed encouragement by winning the Puerto Rico primary on Sunday. He’s also trying to beat the flu.

John Kasich: Kasich earned the endorsement of former Terminator and California governor Arnold Schwarzenegger this weekend. He has yet to win a contest, but the Ohio governor is pretty confident that he will win his state. After that, he is placing his hopes on the contest resulting in a brokered convention.

Hillary Clinton and Bernie Sanders clashed over the 2009 auto bailout during Sunday’s Democratic debate in Flint, Michigan. While Sanders insists he opposed the bailout because it bailed out Wall Street, Clinton said she supported it to save the auto industry. At one point during that exchange, Sanders was so frustrated by Clinton’s interruptions he yelled, “Excuse me, I’m talking!” They candidates agreed, however, that Michigan Gov. Rick Snyder should resign over the Flint Water crisis.