Cruz: I Guess Someone Told Trump Megyn Kelly Was Going to be at CPAC 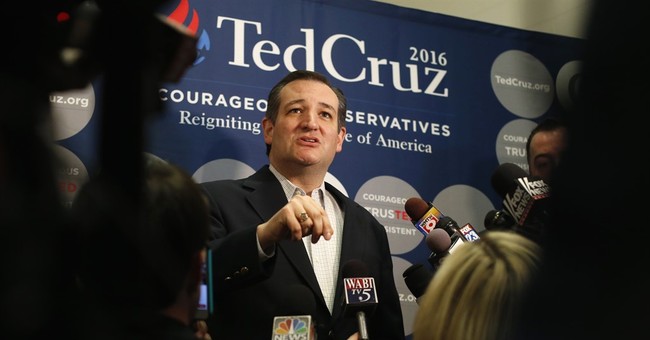 Cruz’s speech was not only an opportunity for him to lay out his presidential platform, but to contrast himself with Trump.

Cruz first repeated his plans to repeal every word of Obamacare, abolish the IRS, roll back federal regulations, pass a flat tax (he imagines a country “where every American can fill out their taxes on a postcard”) and stop amnesty.

Cruz spent a bit of time on that last issue, posing the following question to his fellow GOP contenders: In 2013, where did you stand on the Gang of 8 bill?

While Cruz proudly said he stood against amnesty, he also informed the crowd that Trump was “worse than nowhere.”

“Donald was funding the gang of eight,” Cruz declared, referencing how the businessman donated to five of the eight “gang” members.

Cruz wasn’t quite done with his criticism of Trump, scoffing at the businessman’s promising to be “flexible” as president. “Flexible” is code word for the “get ready to stick it to you,” Cruz told the audience.

That kind of behavior, Cruz said, benefits Wall Street and leaves working men and women in the cold.

Under his watch, millions of high paying jobs will surface and it will be “morning in America.”

Cruz said he foresees a future of young people getting two, three, four, five job offers after graduating college, which elicited cheers from the young audience.

Cruz spent the latter half of his speech focusing on the fight for freedom. The open seat on the Supreme Court needs to be filled by a conservative. “Scalia was a lion of the law and ferociously protected the bill of rights for all of us” and we can't afford to give his seat away.

We are one liberal justice away from threatening Americans’ religious liberty, he warned.

Trump, who admitted he will work with the Democrats, cannot be trusted to replace Scalia’s seat, Cruz said.

Then, the senator made the following pledges:

Cruz also spent a few moments addressing the hostile situation between Israelis and Palestinians. While Trump said he was “neutral” on the subject, Cruz said he has no such intention.

For all the minutes Cruz spent criticizing Trump, the senator did acknowledge that the party needs to unite to defeat Hillary Clinton.

Up to this point in the conference, Cruz's speech by far drew the loudest applause.
Trump Has An Idea on Who Should Run for Governor of Wisconsin
Rebecca Downs
Democrats Have Some Really Bad News for Fierce Trump Critic Adam Kinzinger
Rebecca Downs
President Joe Biden May Not Be Able to Escape This Major Crisis Before the Midterms