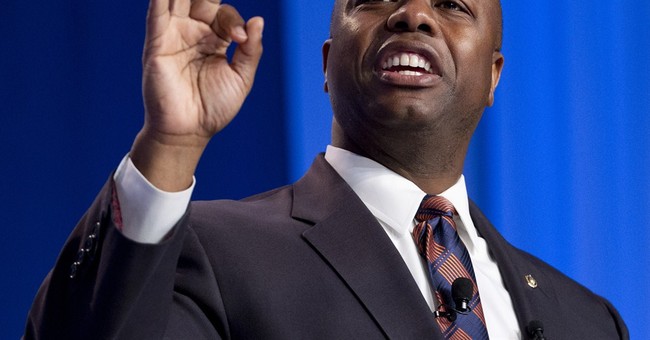 Scott started by criticizing Obama and the Democrats for failing to tackle the nation’s economic disparity when they had full control of both houses:

“Where was their remedy for poverty then? They focused on health care instead."

He then listed off some discouraging numbers since President Obama has taken office. For instance, he pointed out the fact that the government is now shelling out $666 billion on non-defense discretionary spending. But, despite Big Government's excessive spending, Scott sees a happy ending:

“In the end, we win. 2014 is the year the Republican Party takes back the US Senate.”

The senator also thinks the “Great Opportunity Party,” as he calls it, is beginning to expand thanks to the other side’s lack of direction:

“Independent voters are looking to the Republican Party. The welcome mat is out.”

Scott used a personal story to demonstrate how conservatives can win more hearts and minds. Explaining the scene of his near-fatal car crash when he was in high school, the senator shared how a first responder rushed to comfort him after the shock of the accident. This kind of compassion for constituents, he explained, will help Republicans win votes.

"If we win people, elections will take care of themselves."

In keeping with his optimistic theme, he ended the speech on a high note:

“Every problem seems to culminate with a promise. Let’s rewrite history for the greatest nation on earth.”

Correction: An earlier version of this post read that Tim Scott was a U.S. representative. He is a U.S. senator.