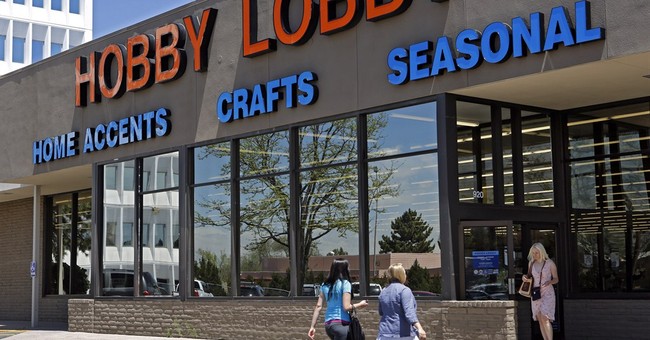 Not all the pro-life victories are coming from Texas. Friday in Oklahoma City, a federal judge awarded the Christian-owned arts and crafts retail chain Hobby Lobby an exemption from the Obamacare abortion pill mandate, which would require the company to violate its religious faith by offering its employees contraceptives.

U.S. District Judge Joe Heaton issued the preliminary injunction for Hobby Lobby and its sister company, the Mardel Christian bookstore chain, and granted the case a stay until October 1, giving the federal government time to mull over an appeal. The judge’s decision comes just a month after the 10th U.S. Circuit Court of Appeals ruled the companies were likely to prevail.

Back in November, Hobby Lobby CEO David Green penned a letter challenging the Health and Human Services birth control mandate, explaining how it would jeopardize his company’s religious conscience. Here is his last powerful paragraph:

“Now our faith is being challenged by the federal government. The Health and Human Services ‘preventative services’ mandate forces businesses to provide the ‘morning-after’ and the ‘week-after’ pills in our health insurance plans. These abortion-causing drugs go against our faith, and our family is now being forced to choose between following the laws of the land that we love or maintaining the religious beliefs that have made our business successful and have supported our family and thousands of our employees and their families. We simply cannot abandon our religious beliefs to comply with this mandate.”

Hobby Lobby’s sincerely expressed concerns weren’t limited to paper. Company President Steve Green, son to the CEO, took the stage at this June’s Faith & Freedom Coalition Conference with his wife and children by his side, insisting, “We don’t want to offer abortive pills to our employees.”

Now, thanks to his company’s recent court success, they won’t have to.

"We're just very excited. This is a great step for us," the president said.

Hobby Lobby has 556 stores in 45 U.S. states and employs almost 23,000 people. It’s a successful business – and the Greens want to keep it that way. In addition to making sure their stores are fully stocked and their workers happy, they certainly don’t need the stress of worrying about their faith. They’re not alone. Hobby Lobby filed one of the 63 lawsuits challenging the unpopular birth control mandate, more than half of which came from for-profit businesses.

The Greens’ recent victory over Obamacare is yet another defeat for the healthcare bill, which has had quite the tumultuous week. It seems that while Hobby Lobby merchandise continues to fly off the shelves, Obamacare is still proving to be a hard bargain.