How Should Conservatives Respond To Obamacare's Medicaid Expansion? 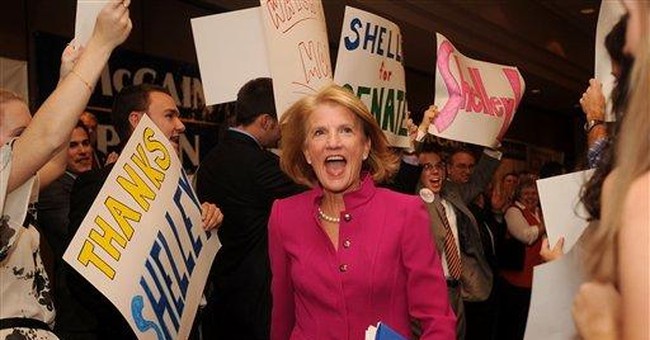 After Obamacare's disastrous rollout, Democrats appear to have resigned themselves to the fact that Obamacare as a whole will never be a political plus for their party.

Obama clearly lied about being able to keep your current health insurance plan, the plans on the Obamacare exchanges are too expensive for most Americans, and the Obamacare plans make it far harder to get actual health care then many Americans thought.

But, some Democrats now argue, there is one part of Obamacare that many Americans are happily signing up for, and Republicans will pay a steep political price if they try and take it away: Medicaid.

The Washington Post's Greg Sargent believes Republicans in states with poorer populations will be hard pressed to continue a push for full repeal now that the Medicaid expansion is underway. Sargent writes:

How would the GOP Senate candidate in West Virginia, Rep. Shelley Moore Capito, respond if asked directly if she would take insurance away from all these people?

Capito, of course, is a gung-ho supporter of Obamacare repeal. But she has hedged on the Medicaid expansion itself. In December, she reportedly “declined to second-guess the decision” to expand Medicaid, asserting: “We are where we are now, and we have to figure out how to go forward.” But repeal would presumably roll back the Medicaid expansion, too. Does Capito support that?

This is a fair question that all Republicans should be ready to answer. And I think Capito's answer above is a good start. Good conservative policy always begins with an accurate appraisal of the facts on the ground, and the facts on the ground now are that millions of new Americans are enrolling in Medicaid.

And it doesn't really matter if those people would have been eligible before the Obamacare Medicaid expansion or not. Most people who are signing up for Medicaid now, even though they were eligible before Obamacare, will probably end up crediting Obamacare for their new coverage.

But this credit/responsibility/blame swings both ways. Medicaid is simply bad health insurance coverage. There is a reason why liberals sell single payer "Medicare-for-all" and not "Medicaid-for-all." Medicaid's doctor reimbursement rates are significantly lower than Medicare and much lower than private insurance. That is why in some states, as many as 42 percent of doctors do not take new Medicaid patients. It is also why there is very little evidence that Medicaid helps improve actual health outcomes.

But having Medicaid does seem to improve the recipients piece of mind. "You see it in their faces," Janie Hovatter, a patient advocate at Cabin Creek Health Systems in West Virginia told The New York Times, "They just kind of relax."

Republicans cannot let Democrats accuse them of taking that piece of mind away from people. For many Americans, it just wouldn't seem fair.

But they shouldn't make the same mistake Obama did and say, "If you like your plan you can keep it." It was a lie when Obama said it, and it would be a lie if any Republican were to say it too.

For now, Republicans should assure voters they have no plans to repeal anyone's Medicaid coverage. Instead, they should focus instead on rolling back Obamacare. Specifically, they should stick to popular Obamacare fixes like repealing the individual and employer mandates, as well as allowing every American to purchase a catastrophic health care plan.

These policies would allow constituents to keep their Medicaid coverage for now, while also speeding Obamacare's inevitable demise.

Ultimately, however, Republicans are going to need a larger replacement for the entire health care system, including Medicaid, which was terrible before President Obama was ever sworn into office.

But what that plan will look like will ultimately be settled by the 2016 Republican White House nominee. It makes little sense now for any congressional candidate to get ahead of the rest of the party by staking out out a position beyond rolling back the most unpopular parts of Obamcare.