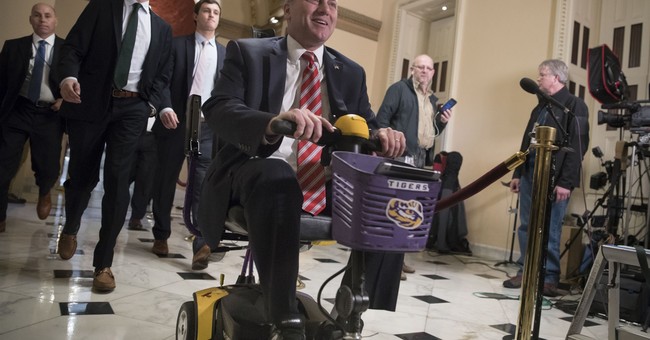 I wrote earlier today about Ben Rhodes and his remarkably bad take on a picture of top Republican officials. Now, he might have been one-upped in the race to find the worst tweet of 2017--by none other than New York Magazine's Jonathan Chait.

Scalise was replying to Rhodes' tweet about hoping to see the obituaries of GOP leadership in the New York Times, along with news of President Donald Trump's impeachment. Scalise, to his credit, was far more measured than he could have been, saying that Rhodes should "reconsider his rhetoric."

You may want to reconsider your rhetoric. https://t.co/VQVWej6n00

I mean, come on. I'd think Scalise, more than just about anyone in the House of Representatives, is pretty aware that Republican leaders are not immortal and that life is precious and fleeting. Had his security team not been present at the baseball practice this past June, we very well could have had an issue of the New York Times featuring the obituaries of Scalise, Sens. Rand Paul (R-KY) and Jeff Flake (R-AZ), Reps. Roger Williams (R-TX), Chuck Fleischmann (R-TN), Trent Kelly (R-MS), Mo Brooks (R-AL), Brad Wenstrup (R-OH), Rodney Davis (R-IL), Jeff Duncan (R-SC), and Joe Barton (R-TX), Jimmy Duncan (R-TN), and Ron DeSantis (R-FL), plus other people present at the practice who were not members of Congress, including at least one child. Even though Scalise's armed security team was present at the field, the shooter, James T. Hodgkinson, was still able to fire more than 70 shots before he was shot and killed. It's not a stretch to say that he likely wouldn't have had trouble killing them all.

Scalise was by far the worst injured in the shooting, and spent weeks in the hospital--including two trips to the ICU. He only returned to Congress at the end of September.

As we approach 2018, maybe we should cool it with the death musings.