BREAKING: Majority Whip Steve Scalise is Back at Work 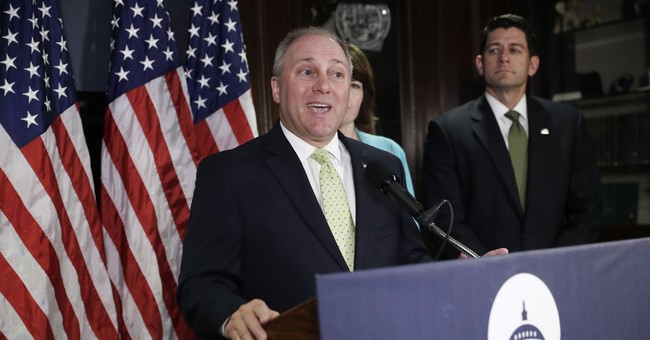 UPDATE: Scalise tweeted a picture of himself at the Capitol, with the caption "I'm back."

Scalise's first interview since the shooting will air this Sunday on 60 Minutes.

Some wonderful news to kick off Thursday morning: More than three months after being nearly assassinated while at practice for the Congressional Baseball Game, House Majority Whip Steve Scalise (R-LA) is back at work. Scalise's office made the announcement just after 10 a.m.

NEWS! Scalise's office announces "he's back" - will be in House floor today

Starting today, Whip Scalise will be resuming his work at the Capitol, his office says.

Scalise had quite the difficult road to recovery after being shot in the pelvis. He was the worst injured in the shooting, and spent more than a month in and out of the intensive care unit at MedStar Washington Hospital Center before being discharged to rehabilitation at the end of July. Scalise underwent numerous surgeries and blood transfusions, and battled infections as well.

In the aftermath of the shooting, there was an impressive display of bipartisanship among Congress. The Congressional Baseball Game raised a record amount of money for its charities.