The Rock Says He's Open to Running for President in 2024 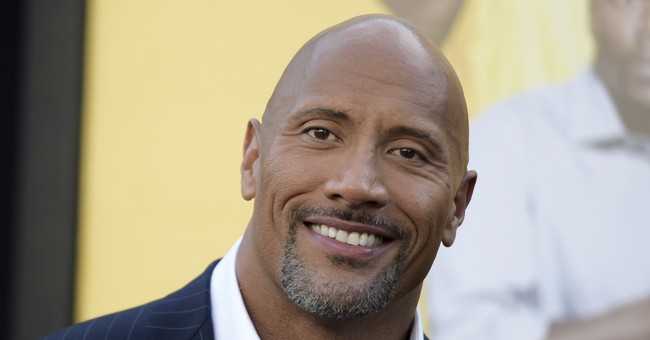 Can you smell what The Rock is cooking?

Speaking to "Variety," actor Dwayne "The Rock" Johnson said that he's considering launching a 2024 run for president. Johnson has been the subject of political rumors since 2016, but this is the first time where he's actually suggested a specific election as a target. Johnson is a registered Independent and attended both the RNC and the DNC.

The multi-hyphenate superstar, who landed a star on the Walk of Fame this week and is gearing up for the release of his holiday blockbuster “Jumanji: Welcome to the Jungle,” has a jam-packed slate of projects lined up through the next presidential election. Yet Johnson says he would “100% consider” running for office.

“I couldn’t do both,” he admits when asked by Variety about his burgeoning career as a movie star, producer and the businessman behind his company, Seven Bucks Productions, which he co-owns with his longtime manager and ex-wife, Dany Garcia. “Realistically, as we go into 2018, when you look at my slate as we’re developing and shooting into 2019 and 2020, the slate goes deep into 2021, so it feels like the realistic consideration would be 2024.”

Johnson told Variety that he'd run because he "cares deeply" about the United States and believes that he has the character necessary for a leader. He did not elaborate on any of his potential policy positions to Variety, but he said he was open to having a running mate who was not in a traditional field. The qualities that Johnson said he'd look for in a VP were that they were a "tremendous leader and a high-quality human being."

As far as celebrities go, Johnson has a solid reputation in the industry and seems to be fairly well-liked and level-headed. This is definitely not an endorsement, but it'll be interesting to see what happens over the next seven years.