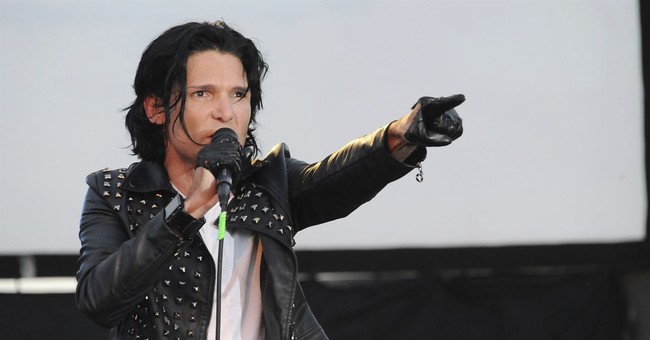 Actor Corey Feldman has been outspoken in his efforts to expose what he describes as Hollywood's massive pedophilia problem. Feldman has publicly named three of his abusers, and has repeatedly said that in 1993, he provided the Santa Barbara police with a list of men he says abused him and others in Hollywood. At the time, Feldman was being interviewed related to the Michael Jackson investigation. Feldman denies he was ever abused by Jackson.

Until Wednesday, the Santa Barbara County Sheriff's Office denied that these recordings existed, and said that Feldman did not name anybody over two decades ago. Now, they've changed their tune as they've located the interview and turned it over to the Los Angeles Police Department.

Santa Barbara County Sheriff’s Office public information officer Kelly Hoover told Fox News on Tuesday night in an emailed statement, “Following the recent inquiries into the Sheriff’s Office interview of Mr. Feldman in 1993, the Santa Barbara County Sheriff’s Office conducted an additional review for any stored items remaining from the Michael Jackson investigation. In a container which included the original reports from the investigation, the Sheriff’s Office located some detective working copies of audio recordings made during the investigation. A copy of Mr. Feldman’s interview was located. The recording is being turned over to the Los Angeles Police Department. Due to the fact that this case involves the alleged sexual abuse of a child, we are unable to comment further and any documentation or evidence related to this case is exempt from release.”

Fox News had originally reached out to the Sheriff’s Office in October at which time they responded, “We are aware of the statements that Mr. Feldman is making regarding an investigation in 1993. Our records do not indicate that he named any suspects."

Well, that's quite the development, and certainly shifts the narrative on Feldman's story to his favor. Throughout his quest to expose abusive men in entertainment, Feldman has been repeatedly mocked, derided, and accused of lying. Feldman says that he believes that his life is at risk.

On Twitter, Feldman celebrated this new news, saying that it was time for the LAPD to re-open the case against the men he says abused him. The 1993 tapes prove, he says, that he reported the crimes within the statute of limitations.

TIME 2 REOPEN THAT CASE @LAPD I DID REPORT IT WITHIN THE STATUTE, SO NOW IT SHOULD B ADMISSIBLE RIGHT?: Corey Feldman report child sexual abuse audio tape found Santa Barbara https://t.co/sgbefANA2i via @usatoday

He also said that he himself has a copy of the interview, and that he may release it if the LAPD will not.

SO NOW THE POLICE R SAYING THEY HAV A COPY OF MY 93 INTERVIEW, BUT THEY CANT RELEASE IT! WELL GUESS WHAT....SO DO I! I WAS RUMMAGING THRU MY GARAGE & CAME UPON THE OLD CASSETTE COPY THE SBPD MADE 4 ME! I HAD NEVER RELEASED IT, BUT NOW I WILL! MAYBE THERES STILL HOPE....