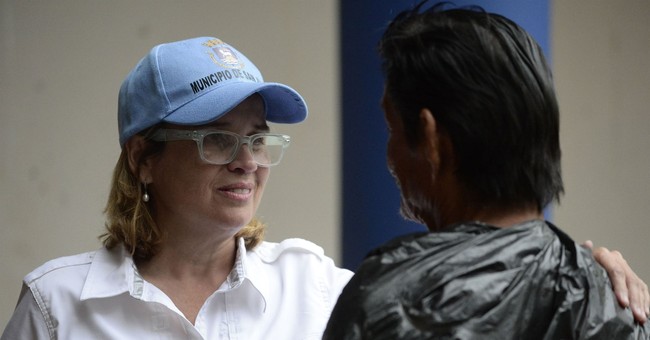 San Juan Mayor Carmen Yulin Cruz was criticized for her "NASTY" t-shirt, which she wore during an interview with Univision. This is the latest of Cruz's statement shirts, having previously worn one that read "HELP US, WE ARE DYING."

San Juan mayor wore jacket over the shirt for MSNBC interview but it was out front for Univision interview pic.twitter.com/Oq21kteYL0

In the interview with Univision's Jorge Ramos, Cruz said that it was a reference to Trump calling her "nasty" a few days ago on Twitter. She then elaborated that she believes that Trump is the nasty one and that he is ignoring Puerto Rico.

This comes just a day after the two appeared to reconcile, with Cruz telling Trump that "it's not about politics."

Dear students: This picture below is the ultimate definition of political self destruction. pic.twitter.com/g6rqthKDcB

So why is she wearing this damn shirt making a political statement? https://t.co/LXbxKMZ9SB

The Washington Examiner's Becket Adams made an interesting point: just where is she getting these shirts on an island that has been, more or less, totally decimated by a hurricane?

OK, 1st shirt I wrote off as an aberration. But how is this mayor able to get custom shirts on a logistically mangled island with no power? pic.twitter.com/Z7vuXCfKAP

Trump called her "nasty" about four days ago. She already has a custom shirt ready to go? Who's making and delivering these and how?

The other day, Matt wrote about how other Puerto Rican politicians have criticized Cruz's conduct, and suggested that she may be plotting a run for governor off of these comments. Regardless of her future plans, she's certainly got the wardrobe set to go.