Ha: UC Berkeley Student Has Had Enough of the Protests, Just Wants to Pass Math 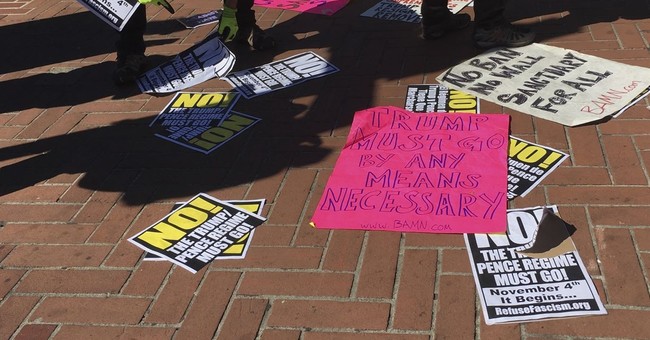 Here's an absolute gem of a clip from a few days ago, when UC Berkeley senior David Marquis was interviewed in the middle of a protest on campus. Unintentionally speaking for, well, just about the entire nation, Marquis said that he was sick of the protests and just really wanted to pass his math midterm. (His class was canceled because of the protests.) Marquis was interviewed by the L.A. Times' Javier Panzar.

Watch the incredible video below, although be warned that there is profanity:

UC Berkeley Senior David Marquis said he is tired of these protests and just wants to go to math class. pic.twitter.com/2pAkQce14s

"I didn't know any of this s--t was happening. I had no idea. I don't leave my house. I don't like this place. It's way too political for me, right? But it's a great education."

"If you look at them, it's ridiculous. You've got a guy with purple hair, with a f--king lightsaber, talking about Hitler. Like, it's hard for me to take any of this seriously."

"Now I have more work to do last minute, because I could not go to math class today. [...] I don't respect any of this."

I mean, bravo. Protest fatigue is definitely a real thing, and I empathize with the non-activist students who want to go to college to, you know, actually learn things. This is reminiscent of an incident this past January, when someone at the University of Washington shut down an anti-Trump protest by reminding the protestors that they're in a library. College used to be a place to learn, but now it seems as though people are using it to build their activism cred--to the detriment of their fellow students like Marquis.

Perhaps the kids are going to be all right after all.