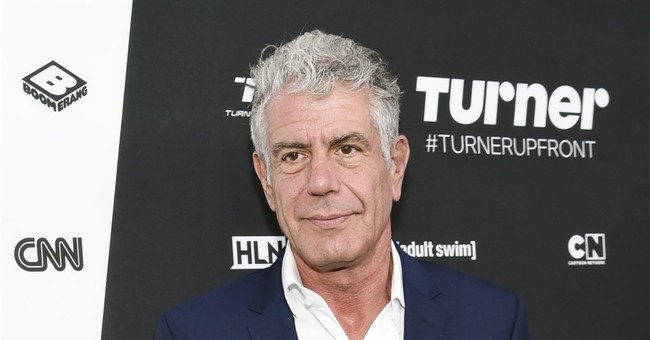 Speaking in an interview with TMZ, CNN's "Anthony Bourdain: Parts Unknown" host Anthony Bourdain said that if he were asked to cater a meeting between President Donald Trump and North Korea's Kim Jong-Un, he would serve the two leaders hemlock. Hemlock is a poison that is fatal upon consumption.

Bourdain also said that he would not film an episode of his show in North Korea, as most of the people there are starving.

Watch the video below, but be warned that there's some foul language.

When Fox News asked him to explain what he meant by "hemlock," Bourdain said that he actually had meant to say "kale" instead.

Bourdain is the third person associated with CNN in recent months to say something questionable about President Trump. CNN fired Kathy Griffin after she posted with a bloody mask designed to look like a Trump head, and the network dropped Reza Aslan after he called the president a "piece of s--t" on Twitter. Bourdain has been critical of Trump in the past, and said he would not feature him on his show as he did with former President Barack Obama.

While I'm not saying that Bourdain should be fired for saying he'd poison the president if given the chance, it does raise an interesting question about what the media will now tolerate about the president. I can't imagine it would have gone over well had another celebrity chef made an identical comment about Obama during his presidency. These comments aren't appropriate, joking or not. Given that they were made days ago with no repercussions from CNN, probably nothing will happen to Bourdain.

And perhaps the Trumps should seek out a different celebrity chef caterer, just in case.