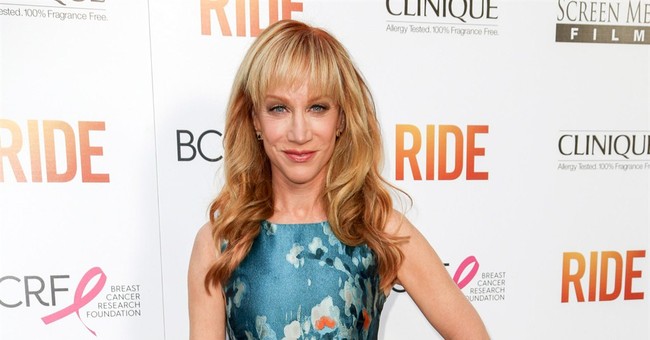 Comedian Kathy Griffin is not a fan of Donald Trump, and made that very clear in a new photo shoot with photographer Tyler Shields. In a shot obtained by TMZ, Griffin is pictured holding a bloodied, beheaded President Trump.

Griffin joked during the shoot that she was going to have to move to Mexico as this shoot was going to land her in federal prison.

Watch below--but be known that it is slightly disturbing, or at least unsettling.

Many people were quick to point out the double standard at what would have happened if a conservative had been pictured clutching the bloody head of a Democratic president.

Let's just be honest here - if a conservative did this to a Democrat president the hell brought down on them would be immeasurable. pic.twitter.com/AS3Bo7Z7bc

Awesome. Now do someone holding the bloody, detached head of Obama. https://t.co/g9ifwaVVpB

I miss the era where desperate people just made sex tapes for publicity. https://t.co/wIy48Vvvg5

If you're CNN, you announce immediately that Kathy Griffin will no longer be hosting your New Year's Eve special right now w/o hesitation. https://t.co/1wb4VAz9sj

Tacky, not edgy. I’m sure progressives will roundly condemn this, right? https://t.co/RdoisbbYAK

Which, to be fair, is a good point. It would certainly not be tolerated if a conservative (celebrity or otherwise--remember the rodeo clown?) mocked the president, and especially not if they fake killed him. The same should be true of the current president, but given the tepid condemnations of Snoop Dogg's assassination of a clown Donald Trump, I guess the precedent has been set.

The irony of the whole thing is that Griffin has nothing to fear about being sent to a federal prison for this "art" piece. The First Amendment exists, and this is protected speech. Disgusting, and she can still be mocked and derided and face consequences (work or social) for it, but she has no risk of being sent to prison over it.