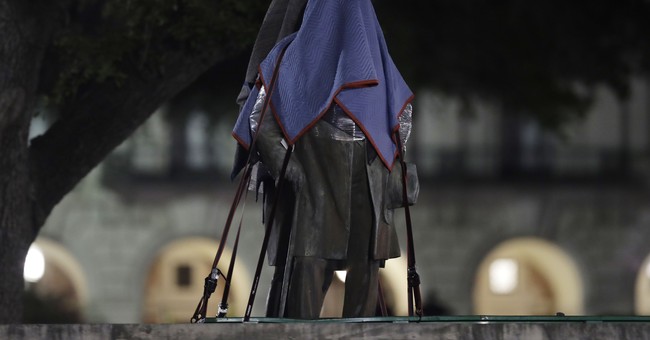 The University of Texas at Austin has become the latest school to remove statues of prominent Confederate figures from campus. On Sunday evening, crews took down statues of Robert E. Lee, Albert Sidney Johnston, and John Reagan. Lee and Johnston were Confederate generals, and Reagan served as the postmaster general for the Confederate States of America. A statue of former Texas Gov. James Stephen Hogg was also removed, but will be re-installed elsewhere on campus. Hogg was never a Confederate soldier (given that he was a young teen during the war), but his statue is considered to be part of the same exhibit as the other three.

University of Texas President Greg Fenves said that the statues were being tabbed for removal because they are from a period of American history that "run counter to the university's core values." Fenves emailed UT students about the removal shortly before work began, and said that he hoped that the university could be an "open, positive, and inclusive" learning environment.

From the Texas Tribune:

The surprise news came with little notice, and the workers were done by sunrise. University president Greg Fenves announced that the statues of Robert E. Lee, Albert Sidney Johnston and John Reagan were being removed because they depict parts of American history that "run counter to the university's core values." His e-mail to the campus community was sent just before 11 p.m. A statue of former Texas Gov. James Stephen Hogg was also marked for removal.

"We do not choose our history, but we choose what we honor and celebrate on our campus," he wrote. "As UT students return in the coming week, I look forward to welcoming them here for a new academic year with a recommitment to an open, positive and inclusive learning environment for all."