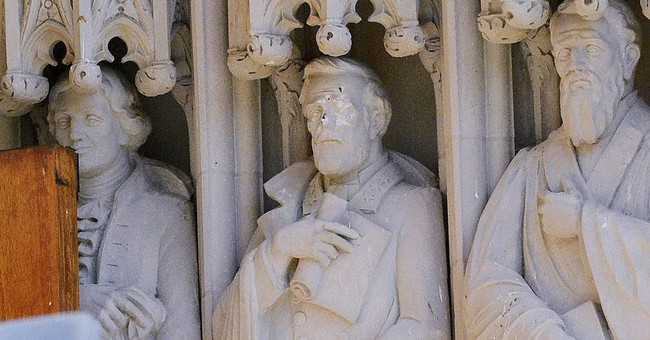 A statue of a Confederate soldier in front of the Durham County, NC courthouse was taken down by a group of "protesters" on Monday who then kicked the statue while shouting, "F*** Trump" and other slogans. At least three of those involved have been arrested, and on Friday hundreds of protesters again took to the streets of Durham, this time to show their support for the vandals.

Statues honoring Confederate soldiers or leaders have been defaced throughout North Carolina this week, including in Winston-Salem and on university campuses.

Wednesday night, a statue of Robert E. Lee on the campus of Durham's Duke University was vandalized. The statue was removed early Saturday morning, university president Vincent E. Price said, to protect the integrity of Duke Chapel, to protect the statue, and to protect students and worshipers who visit Duke Chapel (which is also a tourist destination).

To announce the removal and explain his reasoning Price published a letter to the university community. His words and proposed course of action are wise and calm, and in a tone that is not common in today's political conversations. After the initial paragraphs, Price writes [emphasis added]:

The removal also presents an opportunity for us to learn and heal. The statue will be preserved so that students can study Duke’s complex past and take part in a more inclusive future.

Wednesday night’s act of vandalism made clear that the turmoil and turbulence of recent months do not stop at Duke’s gates. We have a responsibility to come together as a community to determine how we can respond to this unrest in a way that demonstrates our firm commitment to justice, not discrimination; to civil protest, not violence; to authentic dialogue, not rhetoric; and to empathy, not hatred.

Price outlined two steps Duke University will take towards that learning and healing.

I am creating a commission, to include faculty, students, staff, alumni, trustees and members of the Durham community, to advise on next steps and to assist us in navigating the role of memory and history at Duke. The commission will look at how we memorialize individuals on the Duke campus in buildings and sculpture and recommend principles drawn from Duke’s core values to guide us when questions arise.

In addition, and in concert with Provost Sally Kornbluth, we will use the next year to explore various aspects of Duke's history and ambitions through teaching and scholarship. This will include an exhibition in the Library; a campus conversation about controversy and injustice in Duke’s history; and a forum to explore academic freedom, freedom of speech, and freedom of assembly in the university.

There is certainly controversy and injustice in Duke's history.

Prior to being known as Duke University, the campus was Trinity College. Durham industrialist James Buchanan Duke created an endowment upon his death in 1924, leaving a large sum of money to the college, which was then renamed Duke University. Duke's family made its fortune in tobacco in Reconstruction-era North Carolina, forming the American Tobacco Company, the largest tobacco company in the world. Duke's empire also included Duke Energy and a number of textile mills. He was a classic robber baron, being fined by anti-trust regulators numerous times and sued by former business partners. In other words, he was the "dirty capitalist" many of these Antifa groups would abhor.

Duke Energy's legacy continues to be felt in both positive and negative ways. In rural North Carolina, toxic coal ash ponds from Duke Energy's power plants have poisoned thousands and continue to harm the drinking water. The utility has resisted the state's requests to fully clean up their mess and continue to look for cheap and not-totally-effective ways to claim they're taking care of the problem.

But, the Duke family also used their fortune to bring about positive social changes. Washington Duke, James Buchanan Duke's father, gave Trinity College $100,000 when its financial situation was dire - but on the condition that it "open its doors to women, placing them on equal footing with men." The Duke Endowment also funds two children's homes in North Carolina and provides funding to retired United Methodist Church pastors.

What's the point of bringing up the above? The point is not to bash Duke, but rather to show that (as most of us know) the history of people and institutions is complex and doesn't always boil down to a simplistic determination of being good or bad. President Price's letter is a positive start to what hopefully can be a rational conversation about racial divisions in our country.