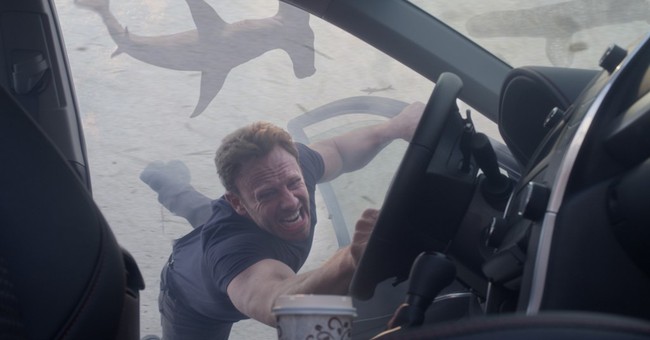 In one of the more amusing stories to emerge in recent memory, it was revealed on Wednesday that President Donald Trump was almost cast as president of the United States in the 2015 made-for-tv film "Sharknado 3: Oh Hell No!" In a report published by The Hollywood Reporter, Sharknado producer David M. Latt said that Trump was initially "thrilled to be asked" to play the role of president in the film.

The role panned out, however, when Trump decided to actually run for real-life president of the United States. Instead, Mark Cuban was chosen to play the president (with Ann Coulter as his VP), and the film was released on July 22, 2015. Trump announced his candidacy only three weeks prior.  Latt claims that Trump's lawyer Michael Cohen threatened to sue him for casting Cuban instead, but Cohen denies this.

But enthusiasm turned into weeks of silence from the Trump camp. Eventually, a reason for the stalling emerged. "Donald's thinking about making a legitimate run for the presidency, so we'll get back to you," Latt recalls Cohen saying. "This might not be the best time." With the production clock ticking, Asylum pulled the trigger on a backup plan, offering the role to Mark Cuban — a modest casting coup that Syfy trumpeted with a press release.

"Then we immediately heard from Trump's lawyer," recalls Latt. "He basically said, 'How dare you? Donald wanted to do this. We're going to sue you! We're going to shut the entire show down!' " Contacted by THR, Cohen acknowledges a dinner with Ziering to discuss casting Trump but says he has no recollection of the angry correspondence. (The Hollywood Reporter)

"Sharknado 3: Oh Hell No!" spawned (at least) two sequels, with the fifth installment of the Sharknado series "Sharknado 5: Global Swarming" set to be released on August 6. Trump was elected president of the United States last November.

Recommended
If Build Back Better Continues to Go Wrong, It Looks Like It Could Be Bernie Sanders' Fault This Time
Rebecca Downs

What a weird world we live in.