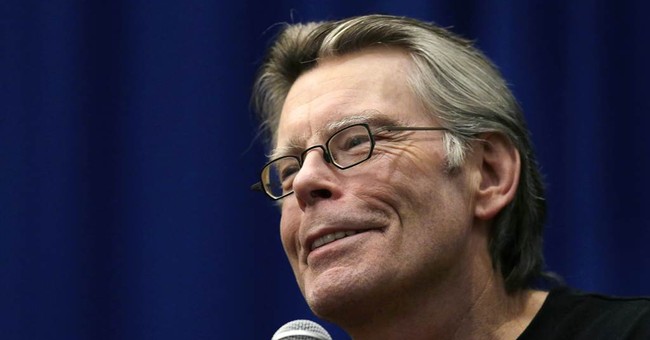 President Donald Trump has apparently blocked horror author (and noted Trump critic) Stephen King on Twitter. The author announced this on his own Twitter on Tuesday morning, joking that he "may have to kill" himself in response. King was blocked by the @RealDonaldTrump account that was used by Trump prior to his election as his personal account, not by the official @POTUS account.

Trump has blocked me from reading his tweets. I may have to kill myself.
— Stephen King (@StephenKing) June 13, 2017

Have others received a notification of being blocked from Trump's tweets, or is it a hoax? It's not as if his tweets are hard to find!
— Stephen King (@StephenKing) June 13, 2017

Fellow author J.K. Rowling stepped in, and said that she still had access to Trump's tweets and would "DM them" to him. "DM" means to "direct message," or privately message, something.

King thanked Rowling for her offer, but said that at least he still could read Vice President Mike Pence's tweets.

Rowling is also not a fan of Trump. She has previously compared him to her character Voldemort, saying that Trump was far worse than the villain in the Harry Potter series. King has also made similar comments about Trump, at one point saying that the president having access to nuclear weapons is more terrifying than any of his past writings.

Other Trump critics have found themselves to be blocked by the @RealDonaldTrump account as well.