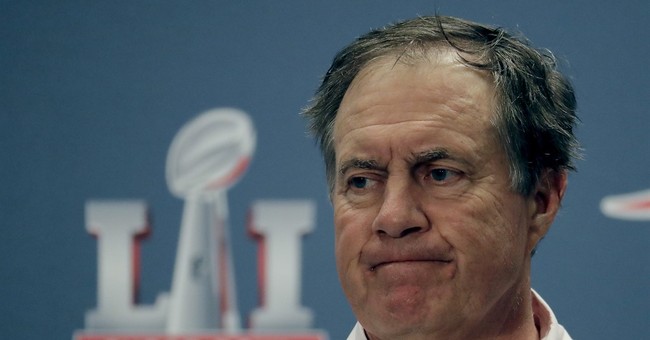 The Super Bowl is this Sunday and will feature the New England Patriots against the Atlanta Falcons. For The New York Times Magazine, this game is actually a feature of the "uncomfortable love affair" between the Patriots and President Donald Trump.

[...]No sports team has been more closely associated with a new president, or perhaps any president, at least since Richard Nixon very publicly adopted the Washington Redskins as his own and even called occasional plays for Coach George Allen. Like Trump, the Patriots are a divisive juggernaut that tend to engender strong passions for and against. The team represents a kind of sporting ideal of Trump’s promise to make “America win so much, you’ll be bored of winning.” New England, which will appear in an N.F.L.-record ninth Super Bowl on Sunday, is a team that wins so much that a lot of America has become, yes, bored of its winning. And no small number of fans are convinced that the Patriots (like Trump) achieve their victories through dubious means and wish they would just go away and get off their TVs forever.

The three main architects of the team’s success — Kraft, Belichick and Brady — have taken pains to emphasize that their allegiance to Trump is based on friendship and loyalty, nothing more. They play golf and attend weddings and call to congratulate one another on elections and Super Bowl wins, those kinds of everyday things.

That's fine. They also shouldn't have to explain these things, because for the love of God, people are allowed to have friends and they don't necessarily have to agree with them politically.

Patriots Owner Robert Kraft is a Democrat who happens to be friends with Donald Trump. When Kraft's wife Myra passed away in 2011, Trump called Kraft weekly for a full year to check in on him, which is a pretty nice thing to do and seems like a genuine friendship. Bill Belichick, the Patriots head coach, wrote Trump a letter wishing him well and hoping for him to make America great again on Election Day. QB Tom Brady is friends with Trump--they're golfing buddies, and Brady had a MAGA hat in his locker at one point. And given that Brady skipped out on the White House visit to meet Obama, he may even be (gasp!) a Republican.

Of course, none of this actually matters. Brady's job is to throw touchdowns, not to advise the president on foreign policy or any other issue. So far, he seems like he's doing a pretty damn good job at throwing touchdowns. The same goes for Belichick. His job is to win football games, and, well, he's won a bunch of them. As for Kraft, is it exactly breaking news that two billionaires are friends? A friendship with a person is in no way endorsing all of their beliefs. I have friends across the political spectrum, and it makes sense that these people do too. Hanging out in an echo chamber is boring.

And even if Brady, Belichick, Kraft et al. were hardcore Trump supporters, that still wouldn't matter. People are allowed to have political views and leanings that diverge from the area where they live. Some people in the Boston area are reportedly quite upset that their favorite football team has ties to Trump, and have stopped supporting the team as such.

To that I say: grow up. People are allowed to be different than you and you don't have to stop liking them because of this. If I stopped listening to or liking people who supported the candidate I didn't vote for in that particular election, I would be living a very sad life with a mostly-empty Spotify library and would be limited to watching the half of Wedding Crashers that features Vince Vaughn. That would be sad, because there's so much great art to be enjoyed that happened to be made by people with whom I disagree. I don't demand political philosophy from Madonna (as much as she feels like espousing it), I demand about 55 minutes of a cohesive pop album every few years. It's possible to divorce a person from their politics, and it seems as though the left could learn a lesson as to how exactly this works.