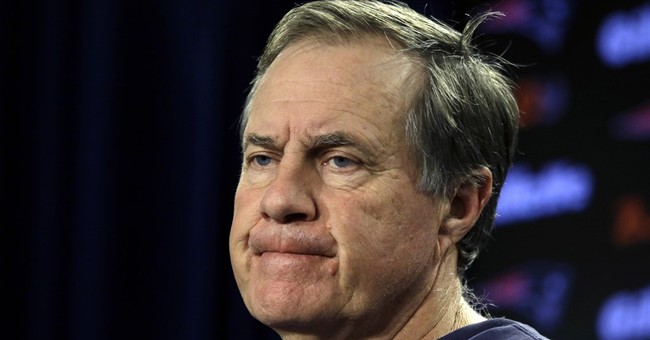 On Monday, speaking at a rally in Manchester, New Hampshire, Donald Trump said that he received a letter from New England Patriots Head Coach Bill Belichick endorsing him and congratulating him on running a "tremendous campaign."

Congratulations on a tremendous campaign. You have dealt with an unbelievable slanted and negative media, and have come out beautifully – beautifully. You’ve proved to be the ultimate competitor and fighter. Your leadership is amazing. I have always had tremendous respect for you, but the toughness and perseverance you have displayed over the past year is remarkable. Hopefully tomorrow’s election results will give the opportunity to make America great again. Best wishes for great results tomorrow.

Some people*, however, had their doubts that the usually-reserved coach actually authored the letter in question.

Look if you're gonna read a fake letter from Bill Belichick make it more believable than this. No SHOT did Bill say that. https://t.co/dcVrX76MEs

.@mrf505 I hate Trump but that doesn't play into reason why I think guy who resigned w this letter wrote him that one pic.twitter.com/hK5ihpYzg1

So its plagerism if u steal words someone else wrote,but its a lie if u make them up urself in a fake letter?Media needs to make up its mind

Oh my gosh. The full "Bill Belichick endorses Trump" letter is even more, uh, *dubious* than I originally imagined. Come on, guys. pic.twitter.com/GVzHxYX9uQ

As it turns out, the letter is real and was actually sent by Belichick to Trump. Belichick was not aware that the letter was going to be read out loud.

CSN New England confirmed this morning that Bill Belichick did indeed drop a note to Donald Trump on Monday.

The Republican presidential hopeful, speaking in Manchester, New Hampshire on Monday night said he had the backing of both the Patriots head coach and quarterback Tom Brady.

And people were still in shock:

Conspiracy theory: Belichick knows most of the country hates him, wrote a letter supporting Trump hoping to push the hate on him. Hero.

NOOOOOO...i'm going to throw away my hoodie with cutoff sleeves as soon as i get home https://t.co/3FIOvL64mo

Now, as Belichick would say: we're on to Election Day.

*Full disclosure: I'm a New England native and a fan of the Patriots, and even I had my doubts about this.