Pope Francis Shuts Down The Idea of Female Priests 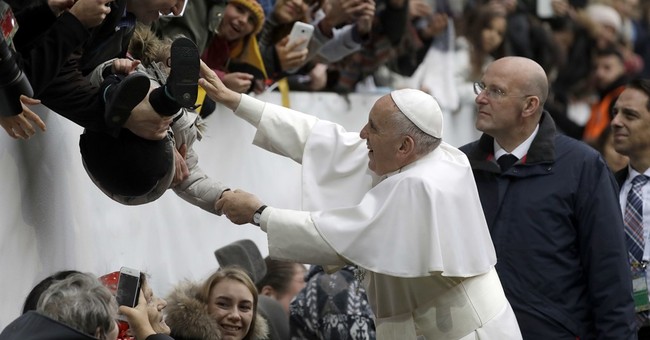 Speaking on the papal plane returning to Rome from Sweden, Pope Francis effectively nixed the idea of female priests, saying that he believes what St. Pope John Paul II said in the 90s was correct. In a 1994 document, Pope John Paul II put into writing that the priesthood is reserved exclusively for men and women cannot be ordained.

The Bishop of Rome also refused to budge on the issue when asked if women could ever possibly be ordained, repeating that Pope John Paul II made it very clear that the priesthood is for men only.

"St. Pope John Paul II had the last clear word on this and it stands, this stands," Francis said.

Francis was referring to a 1994 document by Pope John Paul that closed the door on a female priesthood. The Vatican says this teaching is an infallible part of Catholic tradition.

The reporter then pressed the pope, asking: "But forever, forever? Never, never?

Francis responded: "If we read carefully the declaration by St. John Paul II, it is going in that direction."

In August, Pope Francis commissioned a study on the possibility of female deacons, leading some to believe that the door may be open to female priests.

While some reacted to this "news" negatively, others were pleased that the sometimes liberal-leaning pontiff stuck firm in Church tradition.

your cool pope is problematic https://t.co/UcIfoeK47o

Of course it is. Anyone who thinks @Pontifex would answer differently doesn't know how Catholic doctrine works. https://t.co/QPlhUXH1k6

And it isn't a "ban on women." It's not like just any man can become a priest. https://t.co/ihXb2BieOD

PSA to those covering @Pontifex. It's not a "ban" on ordaining women. The Church believes it's literally impossible. Not a matter of choice.

Pope Francis having to clarify for the 529462887203 time that women will never be priests. pic.twitter.com/QcVokLW3nk