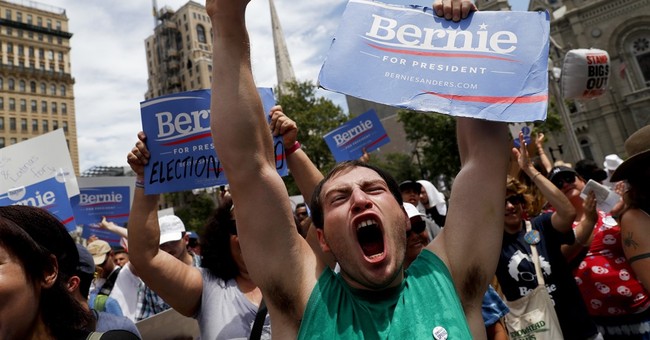 Back in March, supporters of Sen. Bernie Sanders (I-VT) turned out for the Maine Democratic caucuses with such enthusiasm that the state wound up scrapping the caucus system altogether for the 2020 cycle. Sanders won nearly 65 percent of the votes in the state, and Maine attempted to eliminate the ability of superdelegates to choose their candidates after the majority of the state's superdelegates threw their support behind Hillary Clinton.

This being said, perhaps this new poll, conducted by the Boston Globe and Colby College, isn't too surprising. The poll puts Donald Trump only three points behind Clinton, who is polling at 42 percent.

A Colby College-Boston Globe poll released Tuesday shows the presidential race in Maine is now within the margin of error, with Clinton leading Trump, 42 percent to 39 percent.

Curious. In 2012, Barack Obama won Maine by a casual 15 points, and the last time a Republican won the state was 1988. The Clinton campaign should be winning Maine with no issue, but this poll is certainly eye-opening and has to be giving the Clinton camp some grief. It's also interesting that Trump didn't even win the Maine GOP caucus back in March--instead, Sen. Ted Cruz beat the now-nominee by 13 points.

Maine is an unusual state in that the winner does not necessarily take all of its four electoral college votes, and instead each congressional district awards one vote to the winner of the election. While Maine's votes have never actually been split since the state began the practice in the 1970s, this could be the year it actually happens. Trump has about as good a chance as I do to win the 1st congressional district (which is home to Maine's biggest city, Portland), but polls have indicated that he has a real shot of winning the 2nd district.

This, of course, leads back to the "Bernie Bros." Maine has more Democrats than Republicans, and this election should not be a close one. Judging by the fact that Maine Democrats turned out with such intensity the state literally gave up on the concept of holding caucuses, it's hard to say that these people aren't dedicated to their beliefs. Clearly, these poll numbers are showing that a good chunk of these voters aren't making the leap to Clinton. Are these voters going to stay home in November, or switch their votes to Dr. Jill Stein...or even to Trump?