Merkel: The EU Must Not Refuse Muslim Migrants 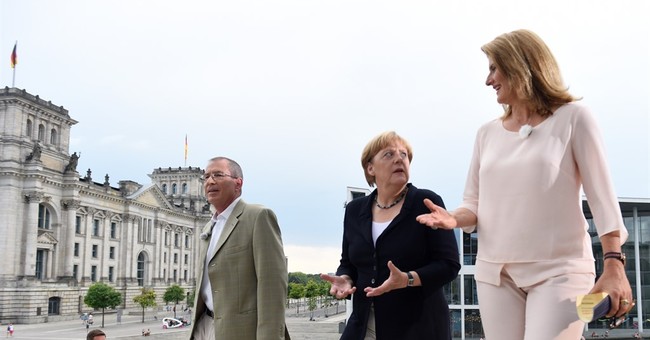 German Chancellor Angela Merkel, speaking to a German television station, said that members of the EU should not be able to refuse Muslim refugees into their countries. Merkel said that there should be a quota system of sorts to ensure that refugees are distributed "fairly" among members of the EU.

German Chancellor Angela Merkel has said it is "unacceptable" for European Union member states to refuse to accept Muslim refugees.

Ms Merkel called for quotas to divide refugees fairly between EU nations in a television interview.

“What I continue to think is wrong is that some say 'we generally don't want Muslims in our country, regardless of whether there's a humanitarian need or not,'” she told German channel ARD.

Currently, European Union laws state that refugees can be placed in the first "safe" country they arrive in, which means that countries like Greece would receive a large amount of people by virtue of its location. Several EU states, such as Slovakia and Hungary, have said point blank that they do not want to accept refugees. Hungary is planning a large border wall as well.

Meanwhile in Sweden, asylum seekers are withdrawing their applications to stay in the country at record rates after the nation began offering applicants money to return to their home countries.

Polling suggests that Merkel may not be elected for a fourth term.