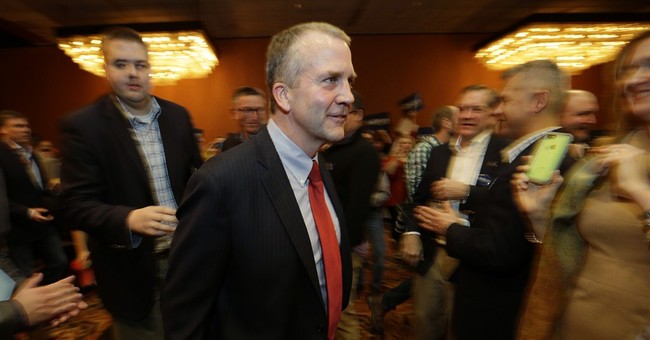 Alaska elected Sen. Dan Sullivan (R) in 2014, after the candidate defeated incumbent Mark Begich by about 6,000 votes. Now, Alaskans could be electing another Dan Sullivan to the Senate: the former mayor of Anchorage is launching a primary challenge to Sen. Lisa Murkowski (R).

Sullivan is a long-shot candidate, who filed a last-minute primary challenge to Murkowski shortly before the deadline to register. He called the race a "David vs. Goliath" type situation.

Ex-Mayor Sullivan finished filling out his paperwork at the office counter while joking with reporters about lifting Sen. Dan Sullivan's old campaign signs.

The candidate seemed torn about entering the campaign and said he had "been pacing all day, up and down my living room, with my lovely bride Lynette, discussing the pros and cons."

And while he described the race against Murkowski as "David versus Goliath," because of Murkowski's substantial financial lead in the race, he insisted he doesn't plan to sling any rocks Murkowski's way.

Instead, Sullivan said he would focus on being "the candidate that probably best reflects the Republican platform and gives conservative Alaskans a choice … I'm not going to try and call out Sen. Murkowski," he said.

Alaska's Senate primary will be held on August 16.