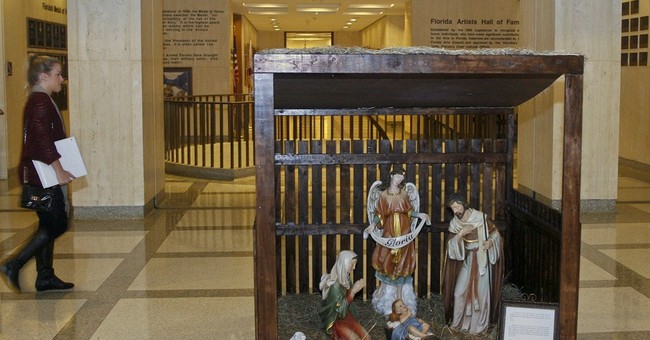 A group of Satanists from New York has applied to build a 7-foot-tall statue of Satan at the Oklahoma State Capitol.

“The monument has been designed to reflect the views of Satanists in Oklahoma City and beyond,” temple spokesman Lucien Greaves said in a statement. “The statue will also have a functional purpose as a chair where people of all ages may sit on the lap of Satan for inspiration and contemplation.”

The Satanic Temple maintains that the Oklahoma Legislature’s decision to authorize a privately funded Ten Commandments monument at the Capitol opened the door for its statue. The Ten Commandments monument was placed on the north steps of the building in 2012, and the Oklahoma chapter of the American Civil Liberties Union has sued to have it removed.

While there is a minimal chance that this statue will ever be built, the group The Satanic Temple has already raised nearly half the costs for its construction. Other religious groups, including the satirical Church of the Flying Spaghetti Monster, have also applied to place statues in Oklahoma's capital.

The Oklahoma Capitol Preservation Commission is not accepting any new requests for a statue in the capitol, citing concerns with the ongoing lawsuit regarding the Ten Commandments monument.