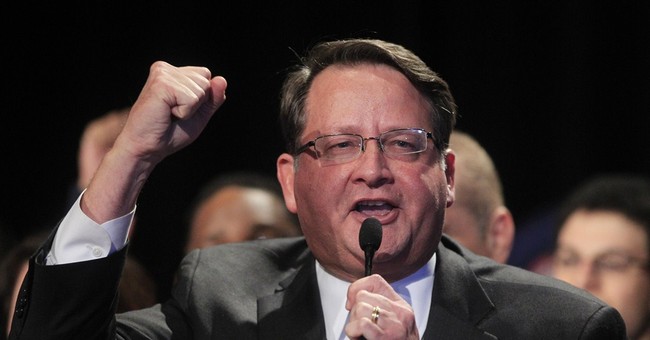 According to the Post, Peters' late father Herb Peters retold the story of the senator's great-great-grandfather, a slave-owning farmer who harbored fugitive and slavery-defender John Wilkes Booth for two days after Booth assassinated President Lincoln.

As the elder Peters told it, five riders in Confederate uniforms approached Garrett’s farmhouse near Port Royal, Va., on April 24, 1865, nine days after Lincoln’s death. But news traveled slowly in those days and Garrett still had not heard of the attack on Lincoln as the president sat with his wife in a balcony of the Ford Theater.

One of the horsemen asked if Booth — traveling under the name of James W. Boyd — could hole up on the property.

“None of the Garretts knew that Booth and co-conspirator David Herold escaped from Washington by horseback into Maryland and were the objects of a massive federal manhunt,” Herb Peters told the Rochester-Avon Historical Society during the 2011 talk.

For two days the wanted assassin lived “completely at ease” with the family, sharing meals and playing with Garrett’s children, until the feds found him. Booth was killed in the Garrett’s tobacco barn — which was also torched — on April 26.

Sen. Peters, the junior senator from Michigan, recently introduced the 1619 Act, a bill that would "increase awareness and understanding of African American history across our schools through expanded access to programming from the National Museum of African American History and Culture," states a press report from the senator's website.

The National Museum of African American History and Culture is the same museum that ignited a firestorm earlier this week when it published a chart attacking white people, who, according to the taxpayer-funded museum, have "created a culture where nonwhite persons are seen as inferior or abnormal." The white culture, according to the museum, is evidenced by such priorities as the nuclear family, a strong work ethic, rugged individualism, and politeness. The museum has since removed the chart.

Sen. Peters has also been hosting virtual discussions on racial justice. Sometimes it's the wokest people who have the most to hide.